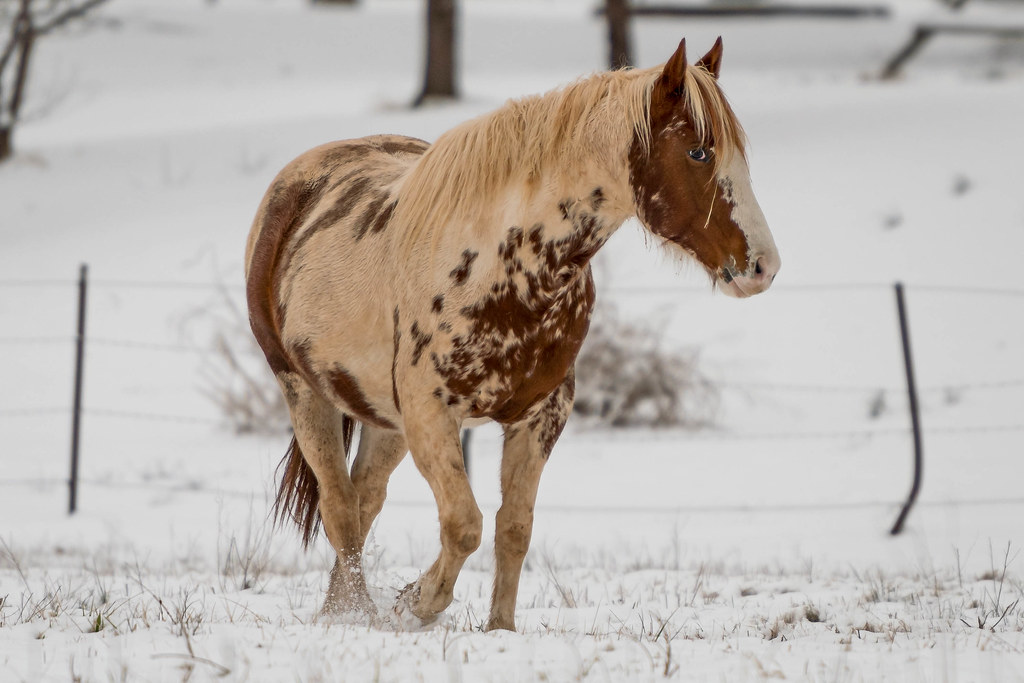 I often talk about how you can find photo opportunities almost anywhere, even in your own backyard. That was certainly true in this case, as this horse is almost literally in my own back yard. Almost, but not quite. There’s a big field behind our house in the middle of the block, I’m guessing maybe ten or fifteen acres, and for as long as I we have lived here there have been a couple of horses living there. I know it’s silly but even after more than ten years and getting to know almost all our neighbors I’m still not exactly sure who owns the horses, but there they are: hanging out, doing their thing with plenty of room to run around and enjoy life.

So when we woke up to a fresh coat of snow one morning in early February I thought about getting a picture of one of the horses. We only get snow once or twice a year here in Oklahoma, and even then it’s usually gone by mid-afternoon, so I knew that if I wanted to get a picture of this horse walking through the fresh powder I wouldn’t have much time. Schools were closed but the library was open, so I hopped in the car with my kids to go return some books, and brought my D500 and 70-200 f/2.8 lens in case the horses were out enjoying the snow.

They were, but it didn’t really work to get a picture. The horses were at the far end of the pasture and even zoomed in to 200mm on a crop-sensor camera I wasn’t really able to get a great shot of them. No worries, I thought. We’ll come back a bit later.

After returning the books and heading back home, the boys wanted to get outside and play so we bundled them up and spend the next hour or two throwing snowballs, pulling sleds, and just running around. After a little while I asked everyone if we could walk down to the edge of the pasture to get a picture, and my wife and the kids were all for it. So we went down…and no dice. The horses were standing around a pile of dirt too far away to get a good shot. I thought that would be the end of it.

Later that day after a round of sledding on a nearby hill and just as the boys were getting hungry for lunch I asked my wife if she wouldn’t mind one last attempt at a horse picture. It was still cold and overcast, so we all walked down and I think at that point the horses had decided we weren’t going to give up on this photo opportunity quite so easily. They saw us at the fence line on the eastern edge and slowly walked over to say hello. And that’s when I got this shot.

The D500’s focusing area covers almost the entire frame so I was able to focus on the horse’s head and keep it locked as it got closer, and I basically just fired off a lot of shots at f/2.8 in the hope that one would work. And this one sure did! I like that you can see the horse’s eye so clearly, as well as the foreleg kicking up a bit of snow as it’s walking towards us.

I think I’m going to use this as an opportunity. I’m going to track down the owners of these horses and share this picture with them. Hopefully they will enjoy looking at it as much as I enjoyed taking it :)