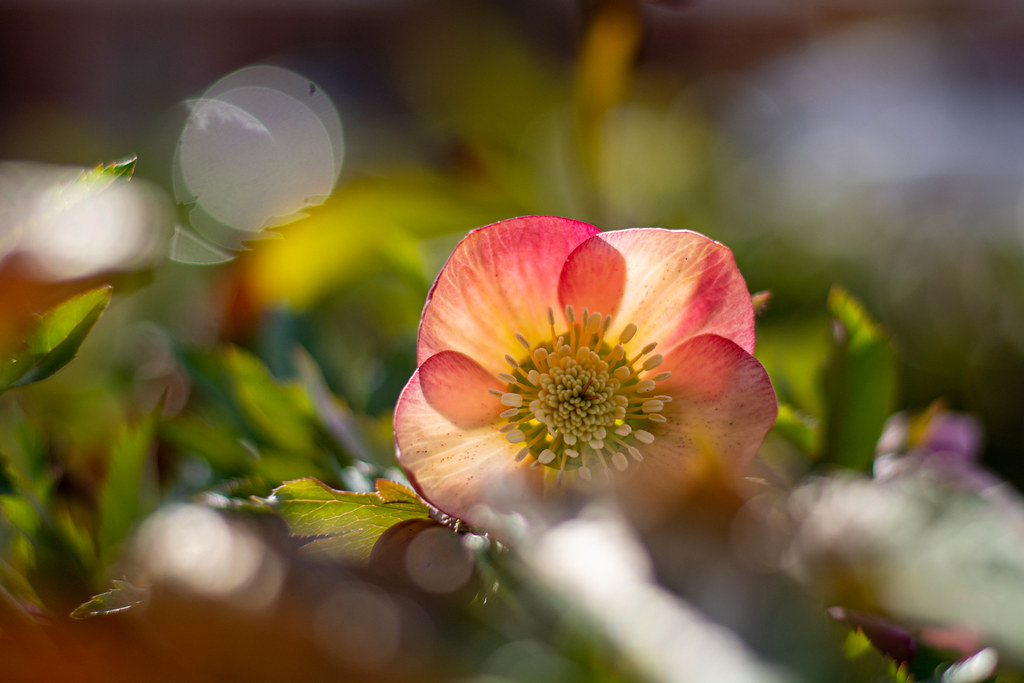 I wish I had taken a picture of what this looked like from a normal vantage point, just walking by and looking down at the flower on the ground. What you’re seeing here isn’t anything special at all, just a pink and yellow flower huddled among the bushes, and I almost passed by without giving it a second thought before I paused to take this picture. What gave me pause was something I had actually been thinking about a few minutes earlier: backlighting. I don’t normally use backlighting on my photos because I like my subjects to be lit normally. As in, from the front. But on this day near the end of January as I was walking around Theta Pond I got to thinking about some of the ways in which the tree leaves and other objects had a bit of a glow to them when I positioned myself in such a way that they were lit from behind.

Then I came across this flower and thought it would make an interesting picture because of the way it demonstrated the same phenomenon. I got down low and shot a few images with my D7100 and 50mm lens at f/2.8 looking through the viewfinder, but wasn’t super happy with what I was getting. At f/2.8 the depth of field was a little too wide and it was difficult to isolate the subject in the frame. So I set my aperture to f/1.8, set my camera way down on the ground, enabled Live View, and took a couple pictures.

On these f/1.8 shots the flower really stood out and everything else, both foreground and background, melted away in a greenish blur. I even liked how part of the flower was obscured by a few leaves in the foreground, almost as though the flower itself was poking its head out to say Hello. And that’s when I noticed something I did not intend: a bright spot of light in the background. It appeared only for a half second when a car drove past on University Avenue and the sun reflected off its windshield, but that bright spot made a huge difference in one of the photos I shot. I realized that was the key to the image.

I went back into Live View, set my camera to Continuous High Speed drive, and waited for a car to drive past. A minute later the light at the intersection turned green and a white sedan came down the street, at which point I held down the shutter to fire off a half-dozen frames. When I loaded them in Lightroom I realized that I got the exact image I was aiming for, and the one you see here. The flower is the main subject, but that pair of overlapping white blurry circles just above it and to the left served as an ideal complement to the flower. All the elements–the white spots in the background, the green foliage in the foreground and background, and the backlit pink petals, come together to form a complete picture. All of this took place within the space of about 90 seconds, and then I stood up, put my camera in my bag, and went about my day. It was another reminder, and one I have been learning continually over many years, that photography opportunities really are all around us if we just keep our eyes open.