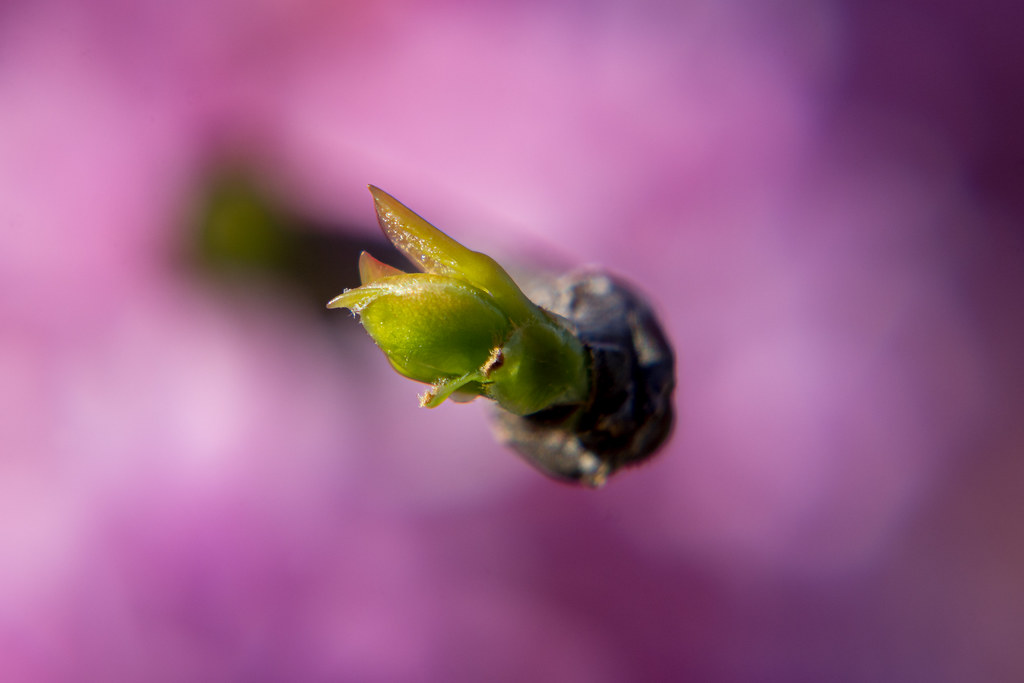 I kind of wish I had a photo shot with a normal camera, with a regular lens, to give you some perspective here. What you’re seeing is a very close-up shot of a flowering redbud, a tree quite common where we live in Oklahoma. I don’t know if it’s a native plant or not, but these things are everywhere in my city and it’s really cool to see the landscape explode in a sea of purple each spring. I’ve taken a few shots of these trees over the years but it’s always neat to revisit them as subjects each year. There’s just something kind of special about seeing such rich hues of purple on so many tree branches.

I shot this one evening in late March after playing a game of kickball in my neighbor’s field with my kids. My wife took the boys inside for their baths and I had a few minutes to walk across the street and shoot some close-ups with my D7100, 50mm f/1.8 lens, and a few close-up filters. This was taken with a combination I almost never use: a +10 filter screwed on top of a +4 filter, which results in a really close-up shot that’s a lot of fun but super unwieldy unless you’re really careful.

To wit: the green tree bud is about 1/8″ in diameter. Depth of field could probably be measured in millimeters on this shot, and yet my aperture was set to f/8. That’s how crazy things get when shooting at close-up distances, and this wasn’t even with a real macro setup. A true macro lens would produce a picture much richer in detail and sharpness, but alas, a true macro lens costs a lot of money that I don’t really want to spend :)

I played around with a few different angles on this shot, eventually settling on what you see here because I quite liked the green bud emerging from what looks like a thick velvet haze. Or, as the old man with the ladder might say, a purple mist :)