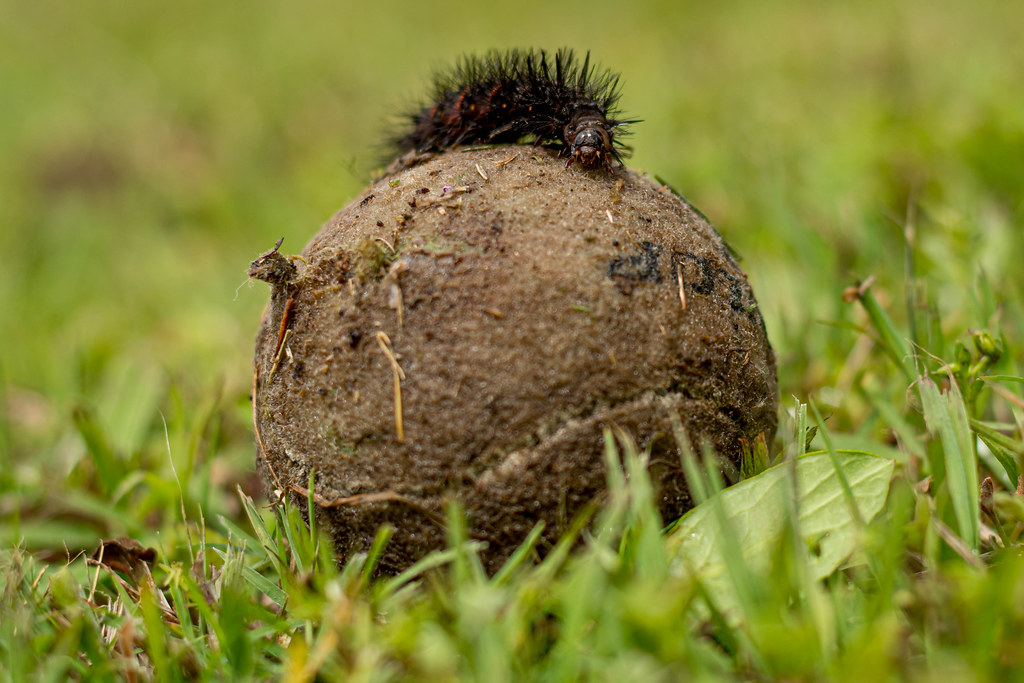 Look, I get it. On first glance this looks like kind of a gross photo. It’s a dirty brown tennis ball in the middle of a grassy field. But bear with me a second: I think it’s kind of interesting and you might too.

It starts about an hour before this photo was taken, when my wife and I were out on a walk with our kids after it rained one morning back in April. The world had ground to a halt with coronavirus-related quarantines and social distancing, so even it was just a little bit warm out we took any chance we could to get the kids outside and running around. It was probably 60 degrees and cloudy but the rain had abated so were like “Get your boots on boys, we’re outta here.” Not a hundred yards from our house our progress ground to a halt when they saw a fuzzy caterpillar crawling around on the curb, and they watched it for at least five minutes while my wife and I chatted with a neighbor. I had my D7100 and 50mm lens with me and I wanted to get a shot of said caterpillar, but at the same time I didn’t want to crowd out my boys who were entranced with its undulating movement across the concrete.

So I left it alone, and after a little while we went on our way on the four-mile walk that had become a daily ritual for our family as a way to get the blood moving and enjoy a little change of scenery from the interior of our house in which we found ourselves far more often than before all the coronavirus mess hit. The boys jumped in puddles, my wife and I talked, and I had my camera at the ready in case any photo opportunities hit.

Sadly, nothing really presented itself (or perhaps I just wasn’t looking close enough) and by the time we got back home I think I might have shot, perhaps, three or four photos. No big deal though, there’s always next time. But then I noticed a caterpillar, possibly the same one from earlier, on the other side of the street. (Was it the unwitting subject of a children’s joke? The world may never know.) Our boys were no longer interested in creepy crawlies, having gone on to play with a soccer ball and tennis racquet, so I spent a minute photographing the caterpillar while my wife talked (at least six feet away!) with our neighbor.

I soon realized that the non-flip-out screen of my D7100 was going to make a photo of said caterpillar a little challenging, and that’s when I noticed this dirty, nasty tennis ball in the gutter. I held it near the caterpillar and, much to my surprise, it crawled right up onto the ball. Bingo. Now this was something I could work with. I took a few shots while holding it with my hand but didn’t like seeing my thumb protruding up from the bottom of the frame, so I set the ball on the wet grass and kept rotating it with my left hand while firing off pictures with my right hand. I wanted to get a picture with the caterpillar cresting the ball, ideally with its head held up, and though I don’t think I quite got the shot I was looking for I am really pleased with what I did get. I took several at f/1.8 (because depth of field!) but eventually had the sense to stop down to 2.8, though perhaps I should have gone even smaller because in this shot, which was indeed at f/2.8, the front of the ball is a little too blurry for my taste. Shallow depth of field isn’t everything, folks. Sometimes you just need things in focus.

This picture was a nice bookend to our walk and a nice way to spend a few minutes doing something fun and creative in the midst of so much gloom and anxiety. I’m writing this post on April 16 when so much of the future is uncertain, and that’s when it feels like the moments to search for that spark of inspiration are more important than ever.