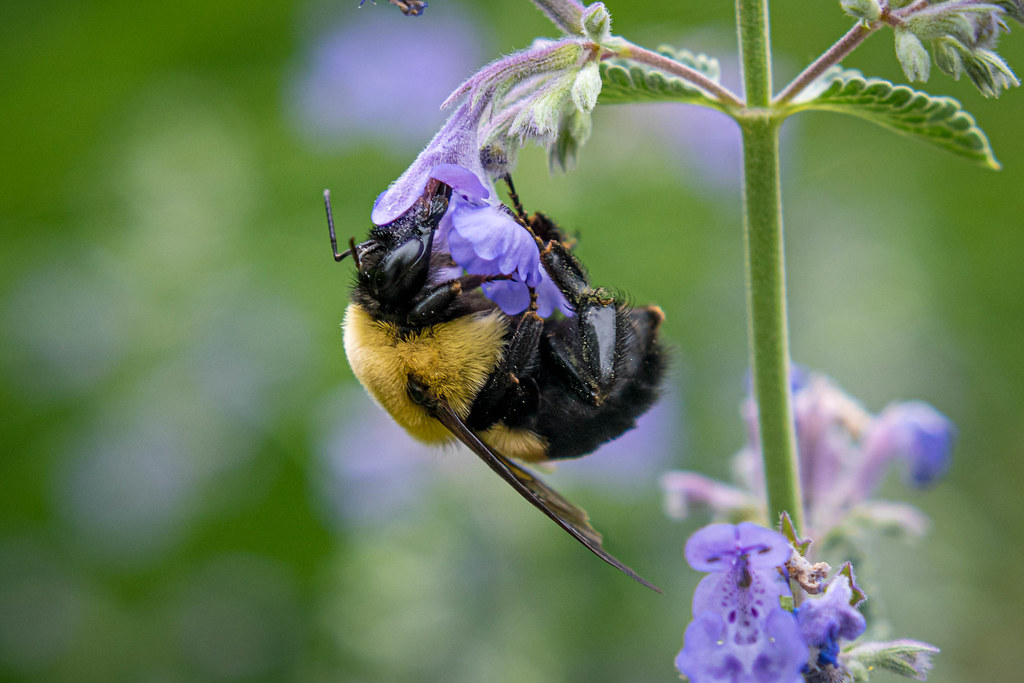 Who knew that a few weeks after posting a photo of a bee on a flower I would end up with another one to share? Not me, certainly, though I must admit that a few of the pictures I have taken recently have certainly got me thinking about purchasing an actual macro lens and getting rid of my set of cheap close-up filters. Part of me enjoys the challenge of shooting with these simple screw-on adapters, but another part of me sure would like to have an actual macro lens to make shots like this so much less hassle. Still, I do enjoy a challenge and it is fun to see what I can capture with a set of limited gear.

They say you can take great photos in your own backyard, and this illustrates that age-old maxim quite well. We’ve had a few small bushes right off our porch that were here when we bought our house years ago and, though we never do anything but trim them in the spring and fall, they keep growing back like clockwork each year. And just like the summer storms that follow close behind a sudden drop in temperature, large yellow bees invariable come to these violet flowers in search of nectar every April and May. I have tried to take photos of them over the years to little avail, but this year I had my Nikon D500 instead of my old D7100, the critical difference being the 10fps shutter on the former (along with near-unlimited buffer) compared to the paltry offering of the latter. I forget what exactly it shoots–perhaps 5 or 6 fps with a buffer that fills before you can blink, thus making fast-action shots well-nigh impossible. And since these bees barely stay in one place for more than a heartbeat, the D500 was a much better tool for taking photos than any of my other cameras.*

So here’s what I did to get this shot: 50mm lens with +4 close-up filter. F/5.6. Auto-ISO with minimum shutter speed of 1/250 second. AF-C with back-button focus. Then I pushed myself through the flowers to get super close to the bee, holding the back button to continue focusing the whole time, and the instant the bee (which was constantly moving from flower to flower) was in my sights I fired off a burst of images. I repeated that process many times over the course of a few days and eventually got this image which was one out of exactly two that came close to turning out, and even those two weren’t as good as I would have liked. I’m still chasing my white whale of bee photography: a ball of black and yellow fuzz hovering in front of a flower, right before going in for a landing. I’ll get that shot someday, and in the meantime it’s fun to have these learning opportunities.

Of course the best part of this shot was that I got to share it with my six-year-old son who was with me the whole time. He was taking pictures of the same bee with his little Canon PowerShot 3 megapixel pocket camera, and was so excited to show me the shots he was able to get with it. I wouldn’t have cared if I got no usable shots at all–photography wasn’t really the point. Spending time with my kids (or, in this case, one kid while the other was riding his bike) was the real goal.

*The crop factor of a DX camera really comes in handy with shots like this, so I’m a bit reluctant to use my D750. And the Fuji X100F…forget it. That camera is awesome, but not for shots like this :)