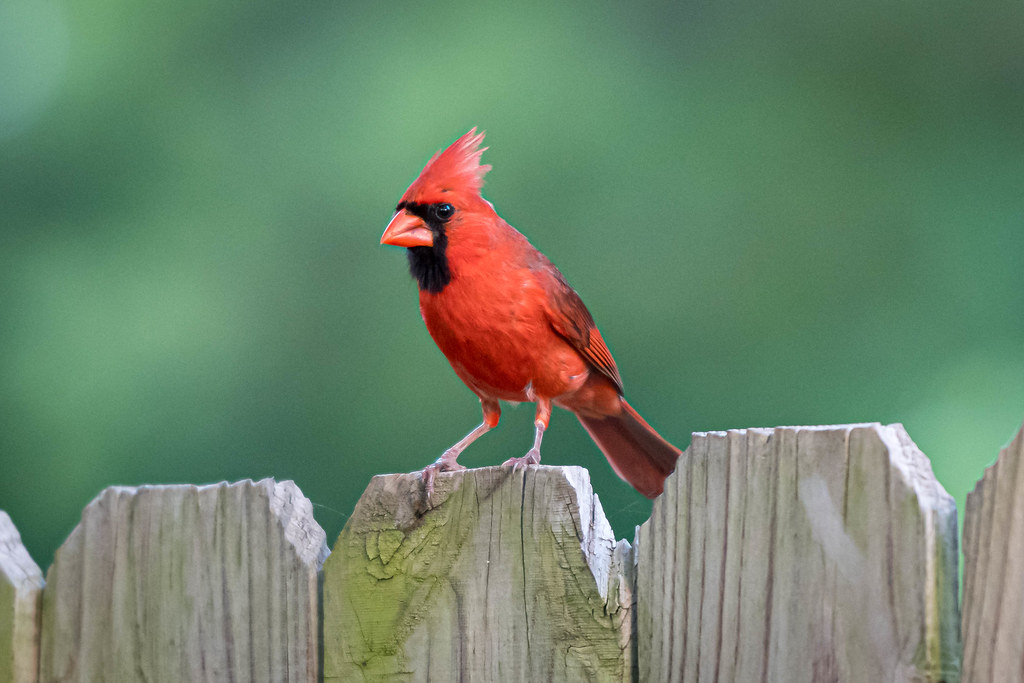 So…recently I shared a few pictures of bees here on the blog and in my descriptions for each one I wrote about how I liked those photos but they weren’t quite what I had hoped for. This picture is the polar opposite. Not only is it what I was hoping to get, it’s actually better. It’s probably the best shot of a bird I have ever taken, and it carries some really cool memories along with it too.

But first, as usual, a bit of background.

Each year we have the pleasure of hearing, and sometimes seeing, cardinals in our back yard. The bright plumage on the males is really something special, especially up close, but even if you can’t see them it’s really fun to hear their songs in the morning. This year in early May I was out with my kids climbing the tree and swinging on ropes in our back yard and I noticed this particular cardinal flying back and forth quite a bit over the course of the afternoon. Then I noticed he was flying into one of our small trees quite a bit, and soon my kids and I put two and two together and figured there must be a nest in that tree. So we waited until he flew away, poked our heads in, and saw two tiny baby birds, newly hatched, lost in sleep while waiting for their next meal.

The boys ran inside to tell my wife and I started thinking about how to get a picture of the bright red bird. I knew I would need my 70-200 f/2.8 lens since it’s the longest zoom I have, and my crop-sensor Nikon D500 too. A longer focal length like 300, 400, or more would give me a lot more freedom and options but alas, I don’t have anything longer than 200mm, so I knew I would have to make do with what was available. I got my camera gear, returned to the back yard, and waited.

And waited more. Soon my kids returned and went back to swinging and climbing, and I had to find a way to walk a line between amateur birdwatcher and attentive father. The cardinal did come out of the tree and I was able to get a couple shots, but nothing special. I went back and forth between shooting photos and running around with my kids, but ended the day without much success at the former. (But great success at the latter, so it’s all good.)

The same pattern repeated itself over the next few days: we had some bird sightings while playing in the yard, of both Papa and Mama cardinal, but I was never able to get a really good picture. I was too far away, or the birds were too high in the tree, or they flew off before I could press the shutter…you know how it goes. The birds came and went, and their babies got louder and larger, and I kept trying to get The Shot with no good results.

That is, until about a week later when I took the picture you see above. It was about 7pm on a mild evening in April. The sun was on its way down and both cardinal parents were spending a great deal of time hanging around on our backyard fence. That’s when I had the idea to stand close to the small tree with their nest and just wait. I thought maybe the birds were used to seeing me by now, and might not freak out at the sight of this human with a gigantic camera lens pointed right at them.

And that’s when the magic started to happen. I slowly, carefully, stepped closer to the fence with my camera firing away. Papa Cardinal alighted on the fence, hopped around, flew off, returned, and repeated that pattern over and over. All the while I was shooting at 10FPS in 12-bit RAW while slowly creeping closer and hoping one of the pictures would turn out. I was probably out there for 45 minutes and ended up taking over 700 shots, but got some real winners including this one.

I got this at 200mm, f/2.8, 1/400 second, ISO 1600. A longer lens would have helped, as I mentioned before, but I did appreciate the nice blurry background courtesy of the extra-large aperture of my lens. I did have to crop this image a lot, but shooting at 20 megapixels gives a lot of room for that so it wasn’t a big deal. In the end I got a picture I’m very proud of, and along the way my kids and I got to learn a little something about birds and their babies too.