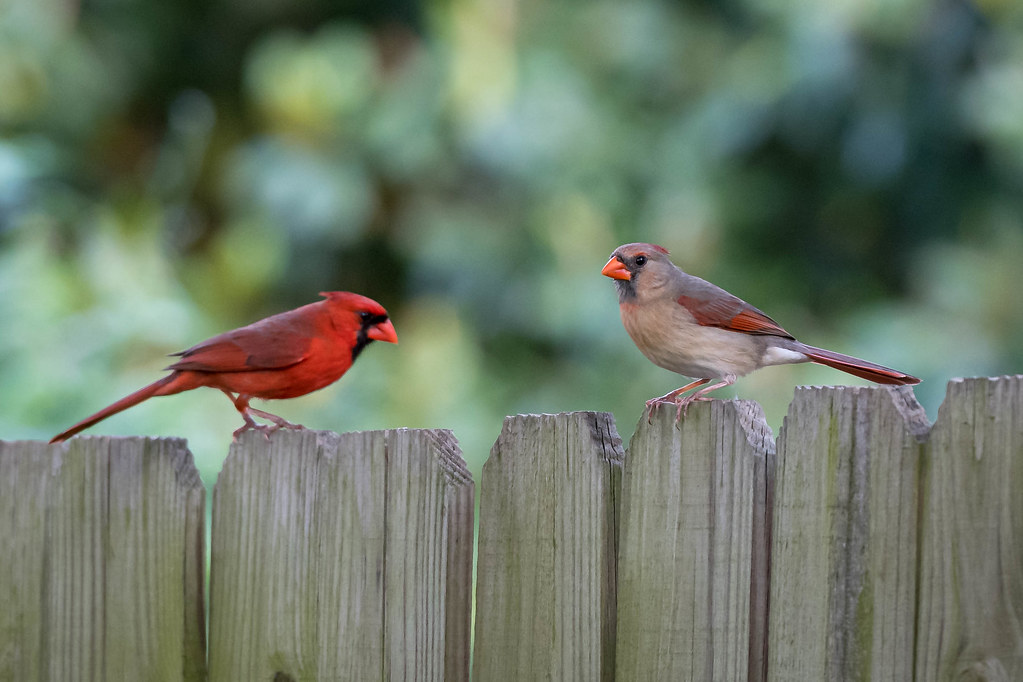 I can’t believe I got this shot.

This is my third and final shot of cardinals, and as you might have guessed I got this in the same timeframe as the other two: between 7 and 7:45pm on a warm spring evening as the sun was slowly setting. When I set out to get a shot of these birds all I had in mind was the male: his brilliant red feathers, his piercing black eyes, and his wild mane of untamed tussle on top of his head. As luck, or perhaps divine providence, would have it, I also got a shot of his partner in child-rearing. But to get this shot of the two of them, together, as if catching up on the day’s events or marveling at how quickly their babies were growing, was really special.

For much of my time taking these photos I saw either one bird or the other, but there was one time when they were both together that nearly made my heart skip a beat. I even popped off a few frames before one of them flew away, and even though I didn’t think the images would turn out too well, I was glad to have gotten the chance to try. To wit: in that handful of pictures the male was in the foreground, the female in the background, and one of them was turned the other way. They weren’t great shots, but they were all I could get.

Until ten minutes later both birds returned, giving me one more opportunity to catch them in a single frame. I had my camera ready: D500, 200mm, Auto-ISO with minimum shutter speed of 1/250 second, and an aperture of f/2.8 which I quickly changed to f/4 before I started firing a burst of images at 10 frames per second. Even at that blistering pace I only got maybe five shots that were worth keeping, and only one–this one right here–that rose above the rest. Not one second after I got this shot one of the birds flew away, and the moment was over. But my oh my, what a fun moment it was.

Look at the birds of the air, for they neither sow nor reap nor gather into barns; yet your heavenly Father feeds them. Are you not of more value than they?

As a postscript to this series, it wasn’t two days later that the birds were gone, having completed their mission of raising two babies from eggs to adulthood. I believe it was the day after I got this shot that one of the birds in the nest was gone, and the next day both had taken to the skies leaving the family of four that had taken up temporary residence in our backyard tree to find new adventures in a place far away. I hope they come back, maybe next Spring, where they will be welcomed with a tree for nesting and some people ready to take their pictures. I’ll be waiting, my camera at the ready.