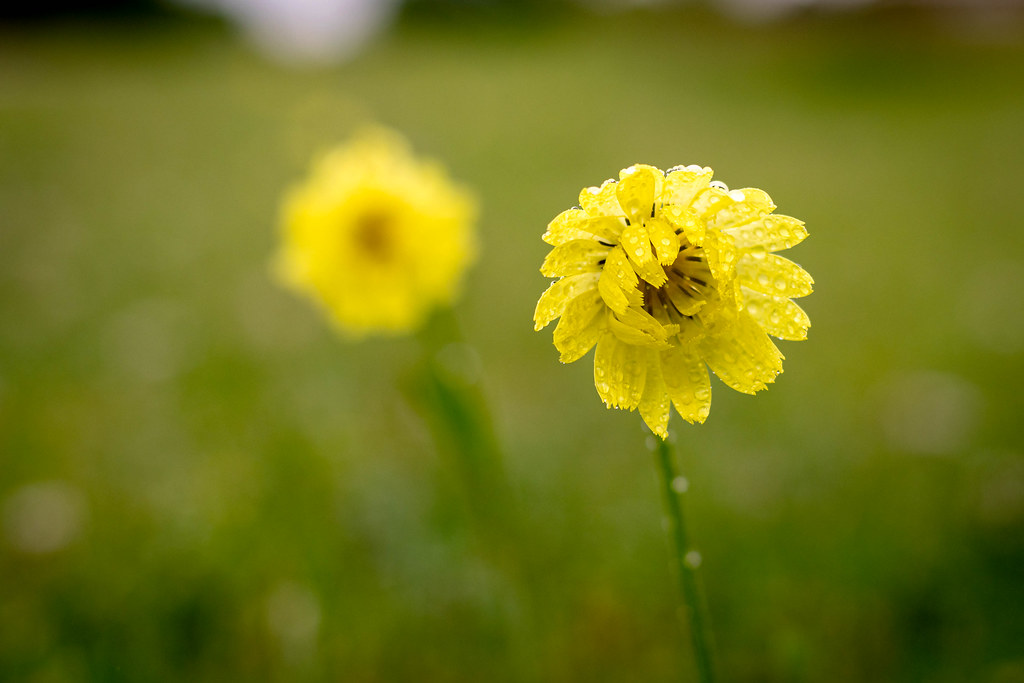 Look, I don’t want to sit here and read too much into things that are really just simple photographs. After all, sometimes (I would argue most of the time) a cigar is just a cigar. And yet, it’s fun to let your mind run wild every now and then and imagine characters, dialog, emotions, and entire scenes where none really exists. I think that’s what makes this picture kind of interesting to me. Someone can look at this and just see two flowers after a bit of rain. Someone else might see a different scene entirely.

But first, the photo itself.

I shot this in a vacant lot while out on a walk with my wife and kids–a lot that, after walking past it many times over the past few weeks, I knew contained a lot of flowers. (Side note: Notice a trend here? I used to take lots of photos while out walking around Theta Pond on the OSU campus. That was before the pandemic…) I brought my D500 with, partly because I really like the images it produces but also because it has a decent degree of weatherproofing which I thought might come in handy if the rain started back up again. Also, because I knew before we left that I might end up taking a shot of some flowers I thought the flip-out screen might come in handy. And sure enough, it did :) Soon we came across the lot and I stayed behind for a bit to take a few shots while the rest of my family went on ahead, and even though the lighting was great and there were indeed a lot of flowers, I found that I had a bit of trouble actually getting a good shot.

Maybe I just didn’t know what I was going for other than to take a picture of some flowers, but for some reason things just weren’t quite clicking. I moved around a bit, tried a few different angles, and eventually came across the scene you see here. If I didn’t have the D500 it would have been pretty tricky and I most likely would have found myself on the ground, but the flip-out screen made this shot a lot easier. Normally I would take a shot of the flower in the background but I thought it was kind of neat how the flower in the foreground was closed in on itself and covered in rain drops. It almost looked like it got into an argument with the flower behind it, and turned away while shedding some tears. If you wanted to extrapolate a bit further you could even go so far as to say that the flower in the background is pleading with the other one: I didn’t mean what I just said! I’m sorry…can you forgive me?

But then, interpretations like that are best left to English majors and poets, not yours truly. To me it’s just a couple of flowers on a rainy day, but it can be fun to speculate :)