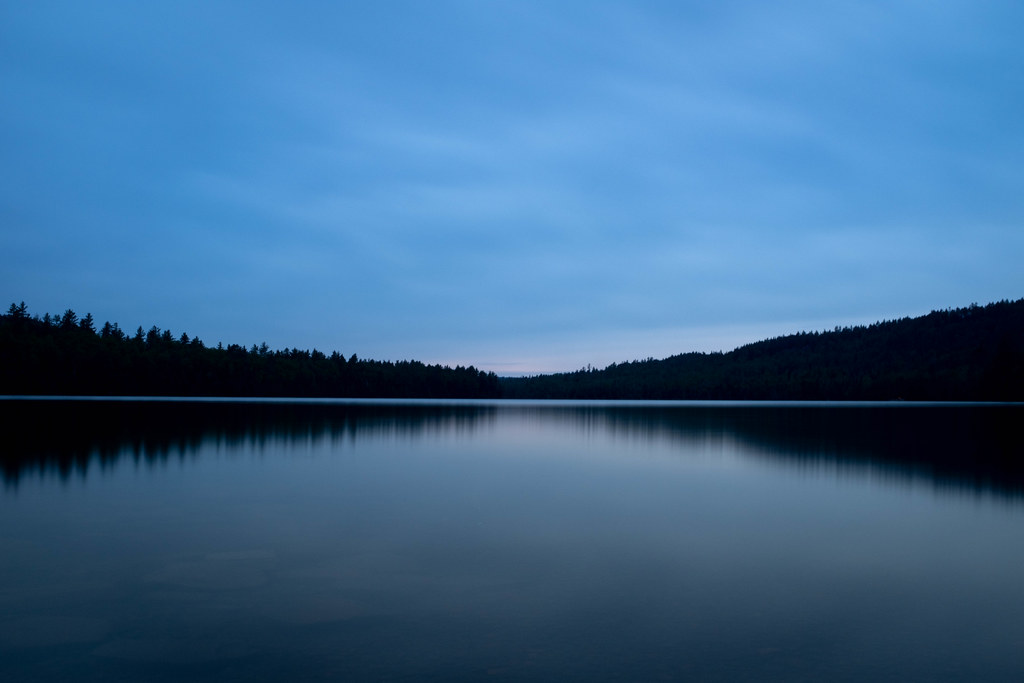 If this looks similar to last week’s photo, that’s because I shot it at the same location, using the same gear, at the same time of day, using almost the same exposure settings. The only difference is that this was 24 hours later, and had different weather conditions which led to a strikingly different image as a result.

In my photo from last week you can see the streaks in the sky which show cloud movement over the course of a two-minute exposure. Clearly those streaks are not present here, which indicates that the weather was much calmer and peaceful. There’s also another difference brought on by the lack of wind: the lake is a perfect reflection of the trees, almost like something out of a Bob Ross painting. Even though last week’s image showed a flat, glassy lake as a result of a long exposure, the reflection of the treeline was missing because of all the small but noticeable ripples on the water throughout the course of the exposure. Here the wind was so still you couldn’t feel it at all, and that sense of calm and peace is what makes the water so still.

It makes for a striking composition when compared to its counterpart from last week: similar on first glance, but vastly different upon closer inspection. At first I didn’t like this one very much, and preferred the dynamic sweeping clouds of the initial image, almost as though the sky itself were in a hurry to get on with night. But the more I look at it, the more I think this image reflects the way the Boundary Waters made me feel: peaceful, calm, serene. It’s full of subtle colors, like the rocks in the lake and the dull orange way in the distance, and I think this picture invites the viewer (or me, at least) to pause and consider things a bit more whereas last week’s image is kind of a one-and-done type of photo. “Ooo…, look at that sky!” and then on to the next image.

This was a 4-minute exposure (Which is a little more difficult than it sounds. Without my cable release I had to keep my finger firmly pressed on the shutter while being bitten by mosquitos.) shot at f/16, ISO 200, and the 3-stop ND filter of my Fuji X100F enabled. And while I enjoyed taking this picture, I was eager to be done with it and get back to the campfire with my cousins. Ironically, the calm scene here is a far cry from the next morning: we had to contend with wind and rain throughout the night and long after daybreak as we made our way back across the lake, the portage, and another lake to end our time at the Boundary Waters. It was an amazing trip and I hope I get the chance to return soon.