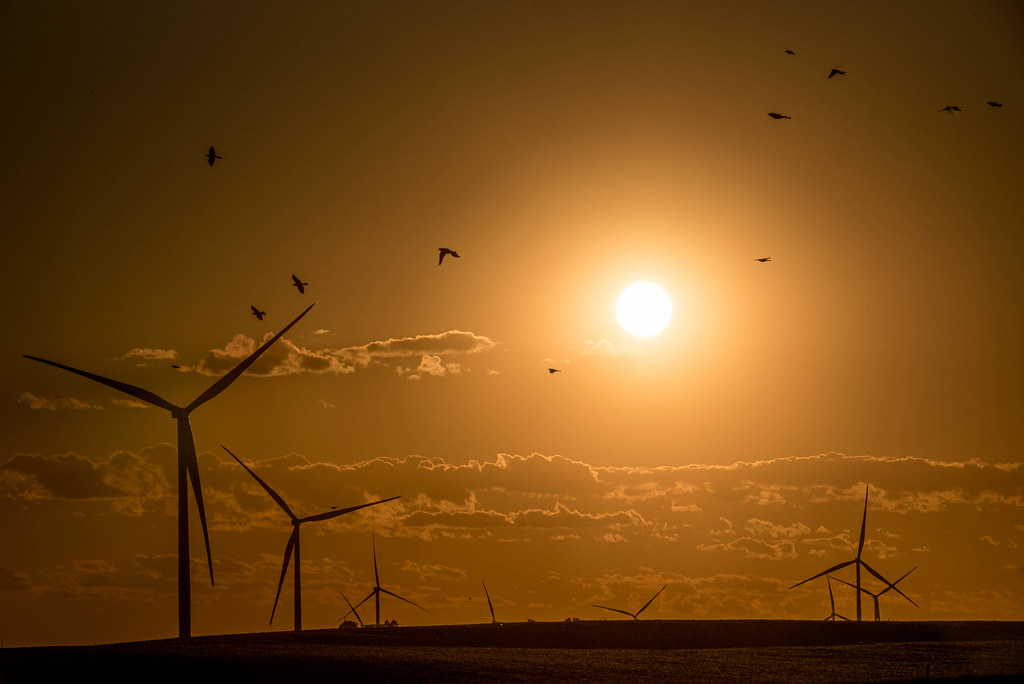 You might be seeing a pattern here: this is the third sunset photo in as many weeks, much like my series of cardinal bird shots from a little while ago. While those avian images were somewhat planned, in that I knew as I was looking through them that I would end up posting at least three, this was more serendipitous though just as enjoyable for me to shoot the photos. While my two earlier sunset pictures were taken at Caribou Lake in the Boundary Waters, this was shot on my drive home somewhere in Iowa. I don’t remember exactly, but judging by the timestamp I think it was maybe an hour north of Des Moines. I was driving south on Interstate 35 when I saw a field of wind turbines set aglow in the fading sunlight, so I looked for a spot to pull over and take a picture.

One thing about shooting photos while on a road trip: you have to keep safety as the top priority. I didn’t want to endanger any other drivers or myself, so I needed to find an exit and a side road from which to take the shot. When you’re on back roads this isn’t much of an issue, but on mainline arteries like the interstate it’s critically important that you prioritize safety when doing any type of photography. As such, I kept driving until I saw an opportunity to leave the road and then, as luck would have it, I ended up on another side road that went north which gave me a clear view of the horizon. (My guess is I took 270th street and then turned north onto Underwood, but I can’t remember for sure.)

The sun sets quickly, often much faster than you might think, so I knew I only had a few minutes to take some shots. I got out my D750 and 70-200 f/2.8 lens, and did everything I could to limit the amount of light coming in. When you’re essentially shooting straight into the sun, the best option is an ND filter but absent that option you have to stop down your aperture, increase your shutter speed, and lower the ISO as much as possible. I don’t remember my initial exposure settings but I did dial in -5EV for exposure compensation, and I was hoping I could get a good shot of the sunset with the clouds and wind turbines.

I knew from previous wind turbine shots that the position of the blades can be a little tricky so I used a continuous high-speed burst, hoping one of my pictures would turn out. I fired off a dozen shots, adjusted my composition, engaged the continuous shutter again, and that’s when this moment happened: a flock of birds flew by right as I was pressing the shutter. I was astounded, having never seen this happen in any of my photos before, and desperately hoped that one of my pictures would turn out. I got exactly two frames with birds in them, and of those two this is the one I liked best.

The birds add such an incredible dynamic element to this shot, and I like how everything is silhouetted against the brilliant setting sun. The clouds give off a beautiful glow, and even the foreground has a bit of light right at the base of the image. I have seen shots like this but never thought I would be able to get one, and I still can’t quite believe it happened. One fraction of a second later and the birds were gone, leaving what was still a good shot of the wind turbines and setting sun, but without that sense of life and energy with the birds.