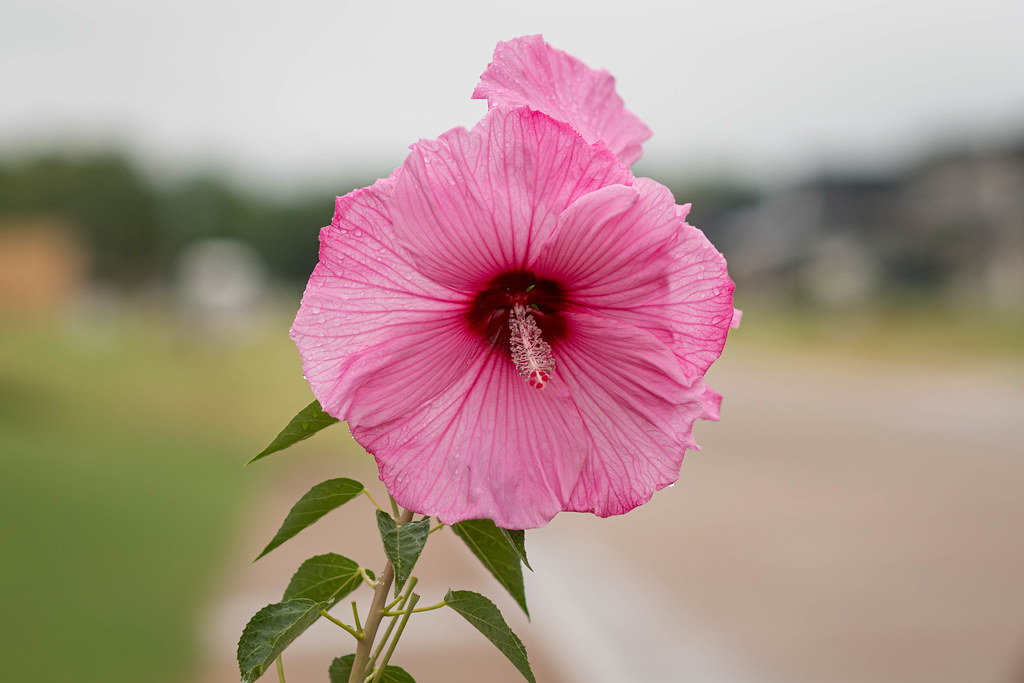 I realize that this picture seems like it has very little to do with perambulating, but part of the title is just the simple fact that I’m not very good at coming up with titles. In typical Simon fashion I don’t know what kind of flower this is, but I do know that it’s big. Large. Huge. At least by my reckoning, anyway. My wife and I walk by this flowering plant every morning on our usual route while our kids bike up ahead, and for a while now I’ve thought about taking a picture because it’s just such an interesting flower to look at. Most days I simply forget to bring my camera and on days when I do remember there’s usually some kind of aesthetic issue: bad lighting, harsh shadows, or the flower itself is a bit closed-up and not very photogenic.

On this particular morning I don’t think I struck photographic gold or anything, but it was a rainy, overcast morning and I do think it made for some good lighting and a nice bit of texture with the damp petals making the pinks and reds just a shade or two richer. I brought my D500 and 85 f/1.8 lens so I could get some shots of the kids on their bikes, but turns out that camera/lens combo worked great for this picture too. I shot this at f/2.8 because that lens isn’t all that sharp wide open and depth of field is super difficult to control at f/1.8, and f/2.8 still gave me plenty of background blur while making all important parts of the flower as sharp as a tack. I played around with composition a bit, shooting from different angles until I got a background that I liked: the street receding into the distance, with the flower mostly against dark earthy colors instead of the sky. I kind of wish it were a bit more isolated with that second flower in the background not present, but I didn’t want to go altering the scene or, worse, damaging the plant just to get a shot. Besides, I know the guy who lives here and I don’t think he would like it too much if I went around bending and poking his plants while snapping some photos.