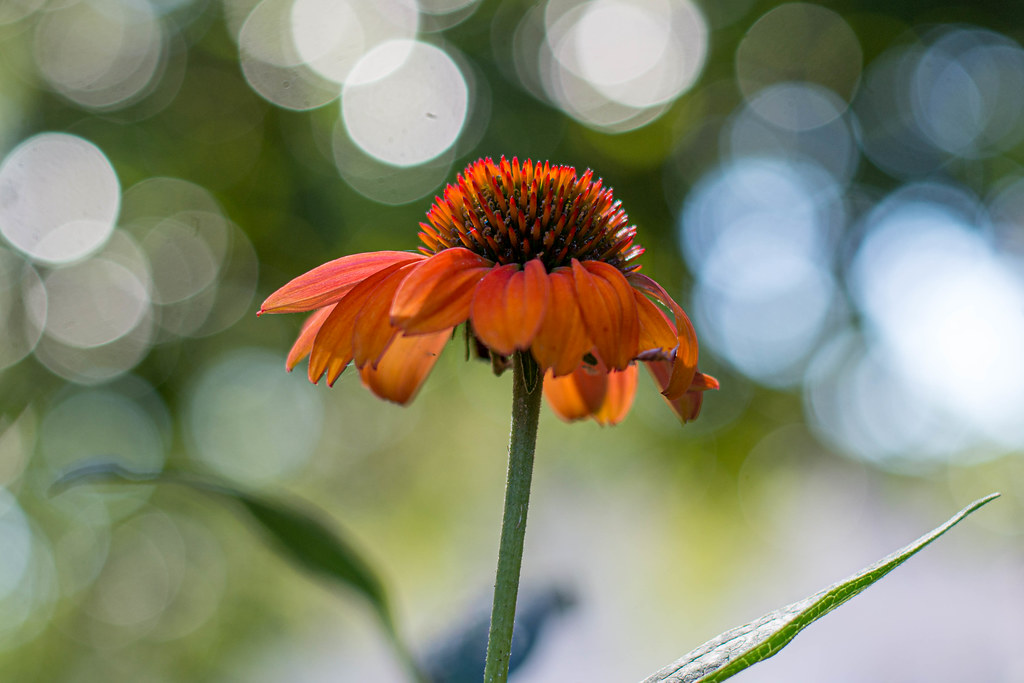 I know it’s been a while since I said this…but I shot this photo on a walk around Theta Pond on the Oklahoma State University campus. Prior to the pandemic I would often go for a quick stroll around the pond while taking a break from work, but in this age of COVID I just haven’t been on campus very much. I’m in the office two days a week and at home the rest of the time, which means the time I do have at OSU is pretty full and doesn’t lend itself to the occasional walk around campus like before. So when I had the opportunity to step out for about five minutes on an early September morning I was armed and ready with my Classic Combo: My D7100 and 50mm f/1.8 lens. I didn’t know if I would find anything worth photographing, but I knew that if I were to have any luck at all it would probably involve the pond.

Soon I came across a small patch of coneflowers which looked bright and colorful–the type of subject certainly worth photographing. So I pointed my camera down and got this shot:

I knew I could do much better than that, so I started following the advice I have given here on Weekly Fifty so many times: I looked at the subject from a different angle. Coneflowers are short, so I wondered what would happen if I got my camera super low to the ground. I held my D7100 pretty low, activated Live View because there was no way I could get my eye to the viewfinder, and just started seeing what various compositions I could come up with on the spot. It took about 30 seconds before I saw that the sunlight poking through a group of magnolia trees in the background provided me with a hugely improved picture opportunity.

With the coneflower in the foreground and the trees in the background I then had to decide what aperture to use. While f/1.8 might seem like a good choice, the tradeoff with that was super shallow depth of field which wasn’t worth it. At least not to me, anyway. I wanted the center of the flower to be tack sharp and a bit of the petals as well, and f/1.8 just didn’t give me enough leeway to do all that. So I stopped down to f/2.4 which was a great compromise (while also experimenting with some smaller apertures just for fun) and gave me the blurry background and subject sharpeness I was aiming for.

One other question remained: How to frame the subject against the background? I wanted the bright balls to form a ring around the flower without intruding on it, and while this wasn’t complicated (all I had to do was shift my camera around a bit) it was an added element to make this picture everything I was aiming for. I have a few other shots where the orange petals overlap the bright spots in the background and it just doesn’t have the same level of polish to it.

So here’s to changing seasons and new perspectives. Hope you all are doing well and staying healthy.