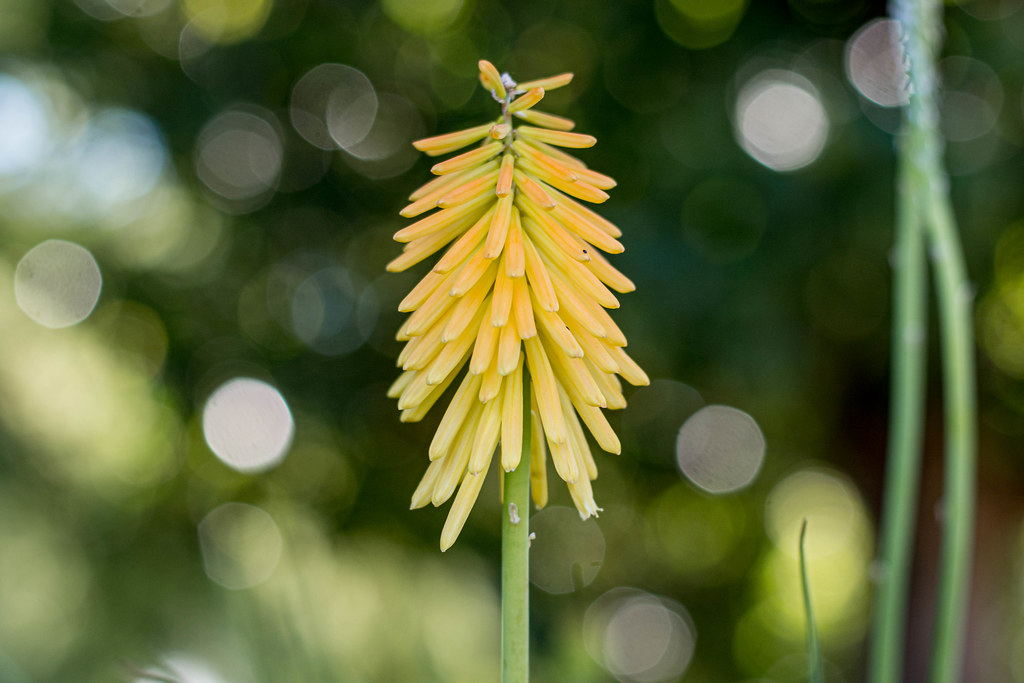 Not exactly the world’s most creative title, eh. What can I say? I’m a photographer, not a poet.

If this picture looks a bit like last week’s image, just know that any similarities are entirely intentional. In fact, I got this about a minute after last week’s photo and used much of the same thought process too: isolated subject in the foreground, blurry balls of light poking through trees in the background. As George Michael might say, it’s a formula but it works.* The difference here is that I didn’t need to experiment: Having just shot the coneflower photo I knew exactly what I wanted when I came across this kniphofia flower which was, incidentally, about ten yards from the coneflower.

Knowing what kind of shot I was going for, I immediately set to work: I stooped low, engaged Live View, used my left hand to gently brush away a foreground flower, adjusted the parameters of my Auto-ISO with a minimum shutter speed of 1/500 in order to compensate for my shaky hand (you try holding a DSLR in one hand, back-button-focusing, while brushing aside another flower all while crouched down awkwardly) and took a few shots. I was able to find an angle where the flower was, for the most part, ringed by blurry balls of light just like the coneflower. I didn’t set out to reinvent the wheel or do anything dramatically different, just practice my skills with a new subject and see what would happen.

Oddly, I actually got a good shot at a wider aperture of f/1.8 but I ended up using this shot at f/2.8 because the background was just too blurry in the other one. Instead of discrete balls of light there were blown-out circles crowding everything else in the frame, and it didn’t have a certain sparkle or charm that this image has. Also, the depth of field problem reared its head with the f/1.8 shot. While this image isn’t going to win any awards for creativity (It’s a near-identical version of the Indian Paintbrush picture I posted in early September, but obviously with a different subject) it did make me happy to take it and was a fun way to get out and see nature for a bit before heading back to the office.

*old-school SNL Dana Carvey reference there. Not sure if George Michael actually said that or not.