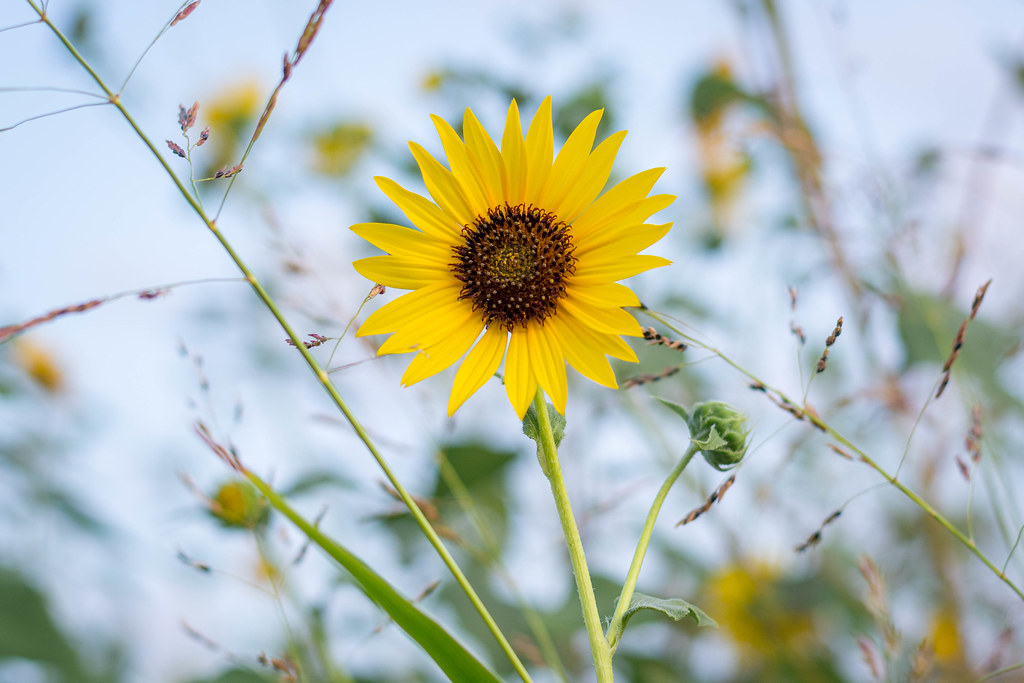 While this picture might seem, at first glance, somewhat similar to the two images posted in previous weeks I can tell you that any overlap is (mostly) coincidental. Contrary to how the two previous images were shot, this one was a bit more planned-out. If not the specific details, at least the general idea. To be sure I didn’t set out to get this exact image, but I did have some ideas in mind and I’m happy with how everything turned out.

It’s always fun to photograph sunflowers: big, bright yellow petals, lots of contrast with the greens and browns, and they bloom in a nice time of year when the seasons are changing and the weather takes on a certain crispness that you can practically feel in the air just by breathing deeply. It makes the act of photographing sunflowers much more than just snapping the shutter, and lets you step back and think about nature and your place in the world if only for a little bit. And perhaps that’s reading a bit too much into it, but in a post-COVID world it can be the little things like this that add a lot of meaning and perspective to what might otherwise be just another normal day.

This was taken by a ditch behind next to a parking lot behind a strip mall not far from my house–not exactly a nature preserve or wildlife refuge. Still, this hopefully illustrates a point that I have made repeatedly on Weekly Fifty over the years: you don’t need exotic locations to get great photos. Just a good eye and a bit of creativity. My family biked past this spot on a Monday evening and thought it would yield some interesting photographs so I made sure to pass by it the next morning on my way to work. There were dozens of small sunflowers all in fairly close proximity, so I had to scoot around a bit to find a good vantage point from which to capture just a single one. It was a little tricky since many of their heads were turned downwards while also being grouped together, but after a minute or two I saw this one that I was pretty sure would work. I shot a handful of pictures at f/2.4 and f/2.8 and liked this one the best, mostly because of the angle. By stooping low and shooting upwards it gave a sense of character and, if I may be so bold, even a hint of majesty to this relatively ordinary flower. I think I might have also had this shot in mind, at least on a subconsicous level, so maybe today’s image could be seen as an homage to one of my earliest photos from Weekly Fifty.