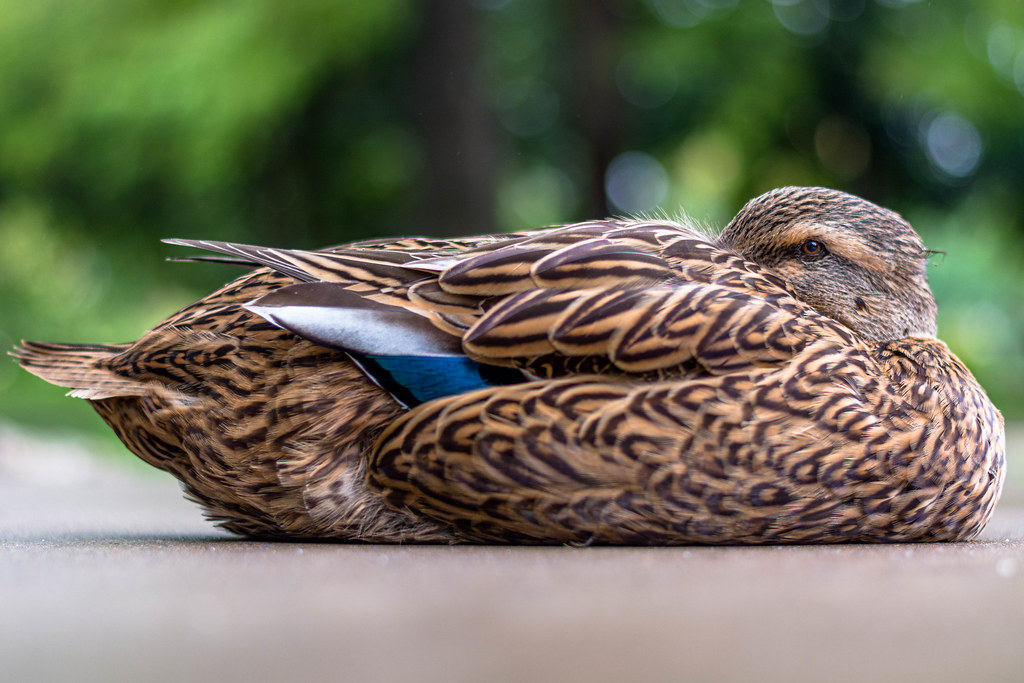 I’ve said before that sometimes it feels like photos of ducks by Theta Pond on campus feels a bit like cheating. Visit the pond on any given day and you’re liable to get at least one good shot of a duck or goose doing something interesting, and if not you can always just bring some food with you to get their attention. A minute later and you’ve got yourself an instant photo-op. Still, there are a few types of waterfowl photos that are a little trickier to get, particularly with a 50mm lens. Even though these animals live on a college campus they are still a bit skittish around people and it’s hard to get a great shot of a duck or goose really close up, and even when they do get close they’re often moving around so quickly you can’t really get a great photo. All that leads me to this week’s shot.

I took my Classic Combo (D7100 and 50mm f/1.8 lens) to work with me on a rainy day in mid-September, thinking I might be able to get a shot of a flower or thistle glistening with precipitation. I brought it in my bag when I went to teach my class and after the students left I took the long way around Theta Pond back to my office. It had stopped raining but the sky was still quite overcast, and I was hoping I could get a shot of some kind of bright, colorful flower amidst all the gray. As I walked along the edge of the pond I stepped quietly past this duck who, in a rather strange twist of fortune, barely acknowledged my presence. Normally any ducks on the footpath scatter when they see people coming, but not this one. Maybe it was the rain, maybe it was the calm weather, maybe it was the relative lack of college students thanks to a semester in the midst of the COVID-19 pandemic. Who knows. But for some reason this duck just stayed put while I walked by, so I thought I might as well try to take its picture.

I held my camera pretty close to the ground, engaged Live View, set the aperture to f/2.8, focused, and took a shot. It was OK, but I knew I could do better.

I put my camera on the ground, tilted it up, engaged Live View, set the aperture to f/2.4, and took a shot. It was a little better, but I knew I could keep going.

I scooted a few inches closer and repeated the same process, but with the aperture varying between f/1.8 and f/2.4. I knew 1.8 would give me a super blurry background, but at the cost of overall sharpness, and yet I found myself taking more than a few shots wide open nonetheless. I kept the framing in mind, making sure to get the entire duck in the shot with a little space on either side, and much to my surprise the duck just sat there unmoving, except for a bit of preening. I wonder if it was just as curious about me as I was of it, but for some reason it just stayed there while I took my photos, quietly minding her business while I went about mine.

A minute later I got up, grabbed my bag, and went on my way. When I loaded my images into Lightroom I could hardly believe the results: the most important part of the image–the duck’s eye–was sharp. Tack sharp. The background had a beautiful mix of rich greens and light accents, and the foreground was as smooth as butter. Everything really seemed to come together and work out with this shot, and I don’t imagine I’ll get the opportunity to take another photo like this again anytime soon.

Thank you, Duck, for letting me take your picture. It’s really cool when things just work out :)