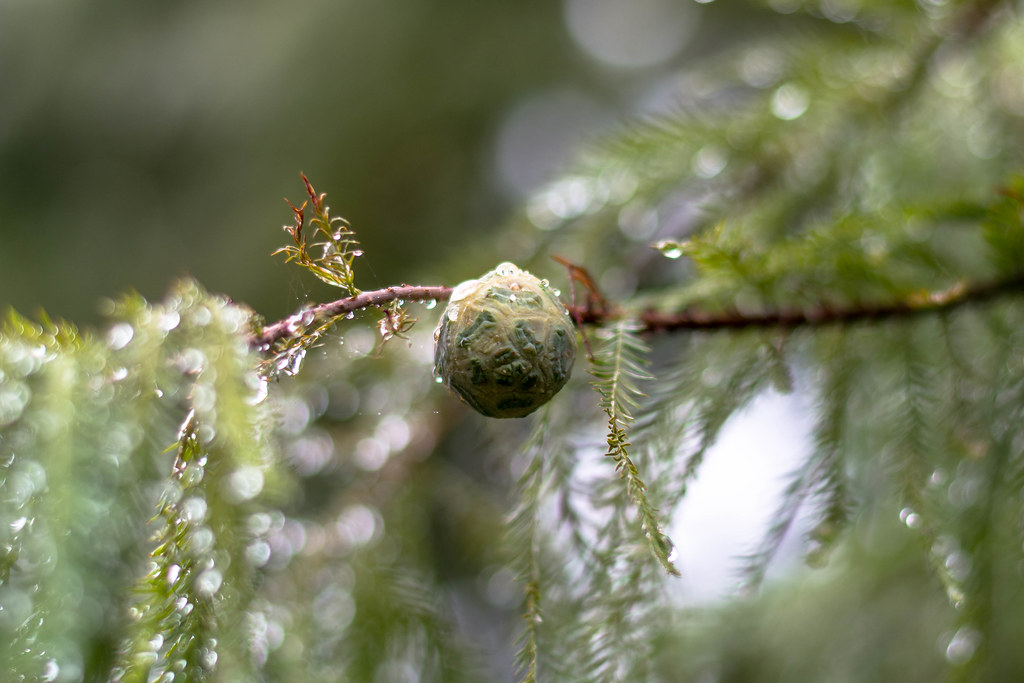 I’ll give you three guesses as to where I shot this photo, and the first two don’t count. Unless Theta Pond was one of the first two, in which case, you win! Not sure what you win, but I’ll let you know when I find out. This was taken about 50 feet away from last week’s image of a duck sitting on the sidewalk, and even though it’s not actually that great of a picture I wanted to use it here on Weekly Fifty because I just like taking shots of things in the rain. There’s something about the way everything in this image glistens and sparkles that, despite the relatively monochromatic nature of the photo, gives it a sense of life and vibrance. Normally I would prefer that the subject, in this case the seed on a Cypress tree, would have something to make it stand out from the rest of the composition. A different color, certainly, but maybe a greater sense of contrast or even a bit of kinetic energy. Something, anything, besides a green ball against a (mostly) green background.

Even so, I like to see even mundane pictures like this as a chance to grow and learn, and usually there is something to appreciate even if it doesn’t always present itself right away. In this case even though this is not one of my top ten (or even top 200) photos I’ve ever posted here on Weekly Fifty, I do like the bright spots of light on the left side and the streak of brown going across the middle. Almost like it’s bisecting the image, and in some sense the blurry dots of light almost make it seem like the picture is shimmering. If you look close enough you can even see some very tiny spider silk threads around some of the needles.

It’s just that the picture as a whole is so…unremarkable. But it was enjoyable to take, and it gave me a chance to use my camera which is always a good thing.