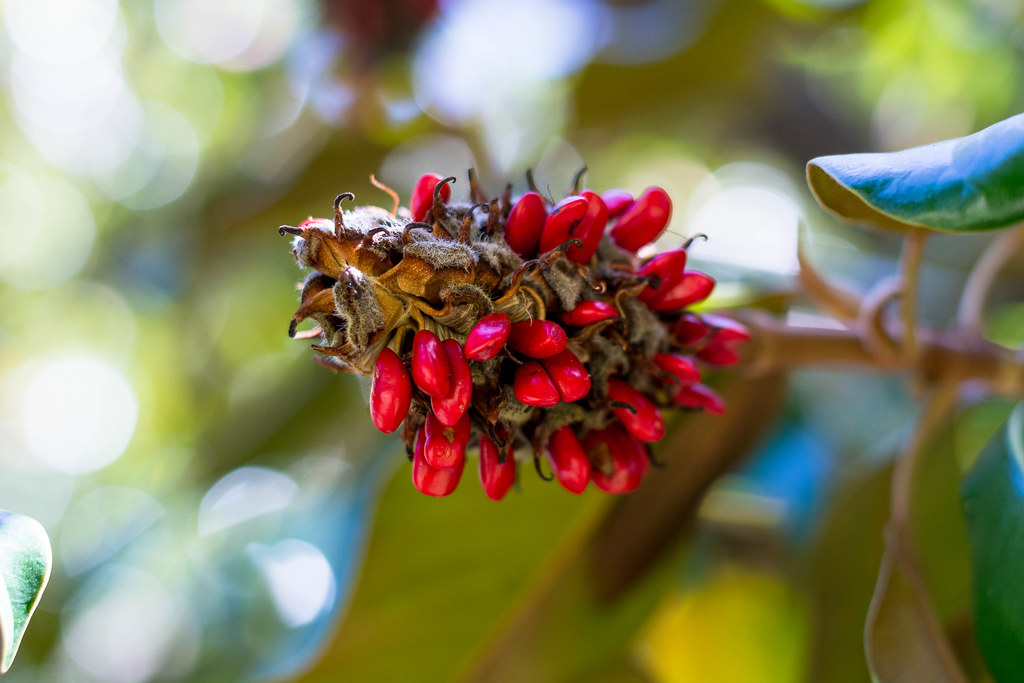 For a good long while now, one of my favorite subjects to photograph on an annual basis is (are?) magnolia seeds, particularly those on the periphery of Theta Pond on the OSU campus. It’s almost like shooting fish in a barrel, because it’s almost difficult to not get a good picture of these brilliant red and brown husks: just point your camera and press the shutter. The brilliant reds contrasting with the rich browns, with deep greens in the background, almost always come together to create a brilliant composition of light and nature. My challenge, then, becomes one of growth and change. How can I take a new look at a similar subject and turn the familiar into something a little more interesting compared to what I might have photographed in years past?

Part of the answer lies in something I have been using more on my DSLRs lately: Live View. Traditionally I have relied on the optical viewfinder to compose my shots, finding the Live View to be a bit clunky and in some ways not exactly a good representation of reality. Plus, Live View on DSLRs (generally speaking, that is) just isn’t up to speed with traditional Optical Viewfinders in terms of autofocus and some other aspects that often matter to me. But I’m learning that for still subjects, particularly those found in nature like flowers and, well, magnolia seed pods, Live View holds some highly compelling creative possibilities. In fact, Live View is what made this shot possible.

What separates this particular shot of a magnolia seed pod from other similar photos I have taken over the years is the attention I paid to the background. Not just the blurriness, but the specific areas of light and shadow–particularly the bright white circles framing the seed pod on the left side. If you know what to look for (and I have, to some degree, learned what to look for) you can look for the conditions that will create these light artifacts and then shoot accordingly by using the optical viewfinder. But the thing about an optical viewfinder is, you can’t really see what you finished shot will look like until you check it on the rear screen. The OVF simply doesn’t show a true representation of what the final photo will look like because the aperture of the lens changes from the time you focus your shot and the time you take your shot the very next instant. Because of that, Live View becomes exceedingly useful for situations like this and it’s one reason the transition to fully mirrorless shooting excites me so much.

To get this shot I first found a seed, then found an angle from which to shoot it, then used Live View to compose my shot, and then adjusted my aperture to f/2.8 to retain subject sharpness while still giving enough background blurriness. It also helped that I could hold my camera above my head to get the shot, whereas the optical viewfinder would have required me to hold my camera up to my face instead of at arm’s length. The result is an image unlike any other magnolia seed I have shot, not because of the seed but because of everything surrounding it. The background is what makes the shot here, and even the foreground to some extent. It was a fun picture to take, and it gives me some creative ideas about how to get more shots like this in the future.