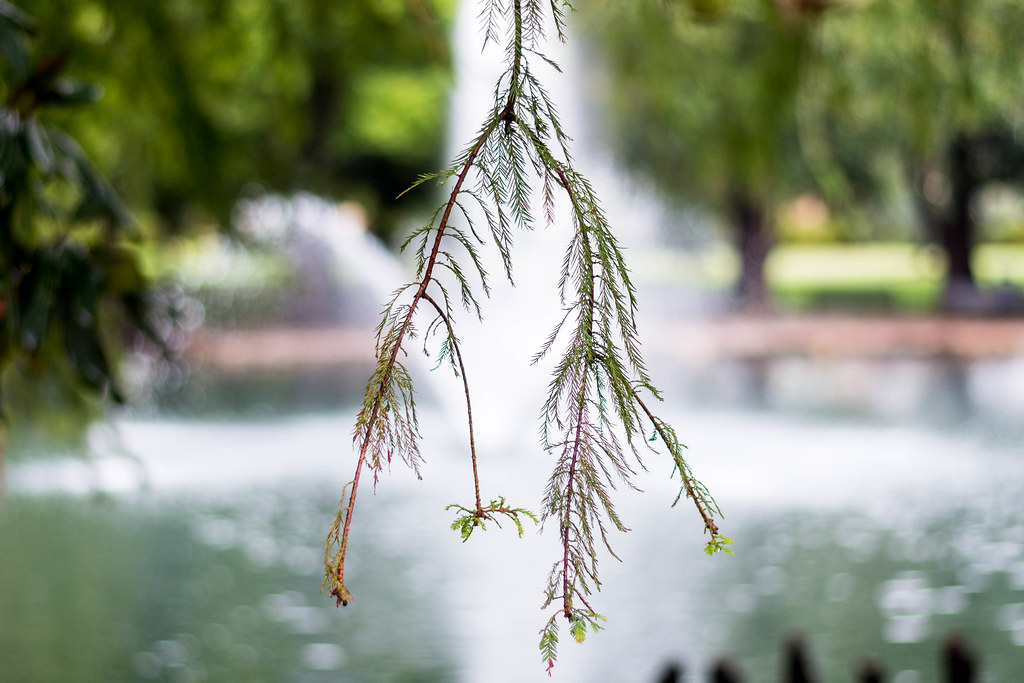 Photographing the fountains at Theta Pond is so overdone it’s practically cliché, and yet, just because a million and one pictures have been taken of these fountains at this pond doesn’t make any additional pictures any less valuable. Whether you’re new to the OSU campus or you’ve been here ten years, there’s a good chance at least one picture on your camera roll will have the Theta Pond fountains in it. We all know I’ve had my fair share of such images here on Weekly Fifty over the years, and yet, that doesn’t mean I don’t like photographing them. Especially when I come across a new way of doing so.

That’s kind of what happened here: I was looking for a shot of some magnolia seed pods which are always a favorite subject of mine at this time of year, but I kept coming up empty. Sure I got a few photos here and there but nothing that really stood out to me as all that interesting. Or even good, if I’m being honest. That’s when I noticed, almost as if for the first time, these cypress tree fronds dangling with one of the two main fountains in the background. Let’s be clear: I’ve been around this pond, and probably stood in this exact spot, many times over the years. But I never thought about using the fountains as the background to accentuate a subject in the foreground quite like this.

After a bit of looking around I realized I could essentially frame one particular branch with the fountain serving as a brilliant white background much like you see here. At least that was the idea, but I wasn’t sure how it would look in an actual photograph. Having never taken a shot like this before I didn’t quite know what aperture to use, only that I wanted the background to be obliterated with the leaves as crispy and crunchy as a bowl of dry breakfast cereal. F/2.8 was the logical choice for maximizing background bokeh with subject sharpness, but I also shot a half dozen frames at f/1.8 just in case. Turns out those final images were the real keepers.

When I got back to Lightroom I noticed that while I liked the f/2.8 versions, the f/1.8 shots were on a whole other level. The images, and this one in particular, turned out precisely how I had hoped they would…with one glaring exception: that classic photographer foe known as chromatic aberration. If you look closely (or maybe even not all that closely) you’ll see that many of the wisps of green have a strange purple fringe around their edges, which is what happens when a camera lens tries its level best to bend and warp the incoming light at the largest possible aperture. In low-quality glass like my classic 50mm f/1.8G lens the tradeoff for a cheap price is the presence of this type of optical imperfection especially at maximum apertures, and while Lightroom can do a bit to fix it you’ll never get rid of it entirely on a picture like this without a lot of time spent in Photoshop. And that was time I didn’t really want to spend.

I ended up picking this image as my favorite despite the optical abnormalities because from a purely compositional standpoint this picture was everything I wanted it to be. I decided I could live with the tradeoff, and use it as a challenge to try and find a way to improve my shot the next time.