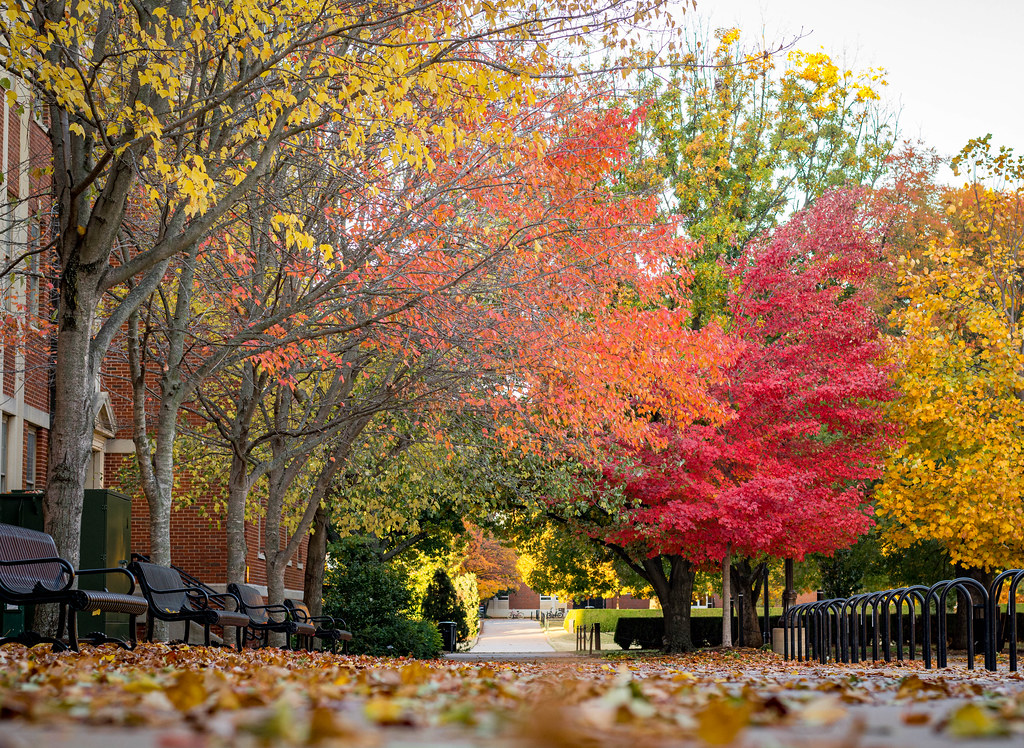 I took this picture eight days after one of the worst ice storms in a while, but you would almost never know it unless you look really carefully. After a week of intense cleanup most things on campus, and around town, are almost back to normal. There are piles of tree limbs and branches on almost every curb, but most of the debris is gone from campus thanks to the tireless efforts of the groundskeepers and cleanup crews. If you look carefully at the red tree you’ll notice that it seems incomplete, almost like someone took a pizza slice-shaped chunk out of the top. That is most likely a missing branch that broke off in the ice storm, but other than that this seems like a pretty normal scene for this time of year.

With one exception: there are no students. Not just an absence of pedestrians in the image, but an absence of evidence that any students are here at all. To be fair, I did shoot this picture at 7:25am (though if you look at the EXIF data on Flickr it probably says otherwise, since I had not yet adjusted my camera clock for Central Standard Time) but even so, it’s clear that this sidewalk has not seen much traffic. During a normal school year you would never see one of the main walkways on campus covered with so many leaves! That only happens when there are no people walking around to shuffle them around, but such is the nature of college during COVID. If this picture makes you feel a sense of calm or peace, that’s pretty much how the entire school year has gone. There’s a low hum of activity, but it’s a shell of what we normally see around here. Not that it’s a bad thing, and I’m glad both students and professors are finding ways to adapt to education during a pandemic. It’s just different, and something I’m still finding it a little strange to adjust to.

As I write this it’s about seven years after I got my D7100, which is the camera I used to get this shot. It’s really interesting to me how well that camera has held up over the years, and while I certainly prefer my D750 for image quality and D500 for sports and action, that D7100 remains a formidable photographic force especially when paired with some good glass. Or even average glass, as is the case here with my trusty ol’ 50mm f/1.8 lens. I kind of wish I had something a bit wider for this shot, but in hindsight I think the constrained field of view of a 50mm lens on an APS-C sensor fit just right.

Hope you’re doing well, and here’s to a better 2021 and the hope that we will get a vaccine soon.