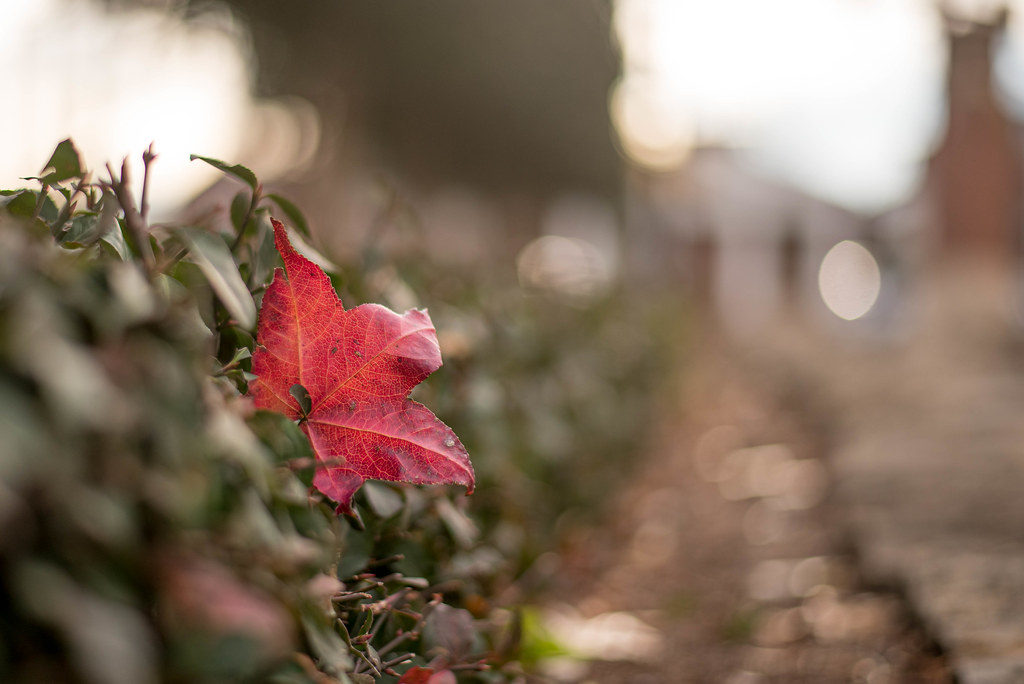 This picture is kind of similar to some that I shot near the end of 2020 in that it has a single subject, in this case a leaf, with some wide-aperture artifacts in the background complementing the main focal point of the image. What separates this image from some of the others I have taken recently is the sheer level of contrast between the subject and the background elements. When I was walking towards Theta Pond one afternoon in early December my eyes were immediately drawn to this scene because of the bright red leaf set against a long row of green bushes, and thought it would be fun to show that extreme level of color contrast in a picture like this. It more or less worked out how I had hoped, but there was one thing I didn’t plan on that turned out to be the proverbial icing on the photographic cake.

As I was lining up this shot I saw that, much like some of my other photos, the light bounced off vehicles as they drove past in the distance which resulted in the bright football-shaped blob on the right side of the picture. What I didn’t expect was all the smaller, similarly-shaped bokeh balls along the lower-right side. I don’t even know what caused those, as the only thing in the frame was just…well, dirt really. Even though the sun was setting which led to the beautiful backlighting, I didn’t really count on the dirt in which these bushes were planted to create anything special in the way of lighting flourishes.

Unlike some of the other images I have taken recently, I shot this with my D750 instead of my D7100. Why the change? Mostly because as I left for work on this particular morning I still had my 50mm lens on my D750 and was too lazy to take it off and put it on my D7100. I think I could have gotten this shot with my D7100 but the crop factor would have meant a few compromises in terms of framing the scene, though I suppose I did end up cropping the original full-frame image a bit anyway. It’s nice to have a bit of wiggle room though, and the flip-out screen on the D750 is nice when framing shots that are at a bit of an awkward angle such as this. Mostly I just enjoy shooting with that D750 and 50mm lens, though. And that’s probably why I had that lens on that camera to begin with: after all is said and done, and even taking into account all the other gear I own, it’s still a joy to go out and shoot with that combo.