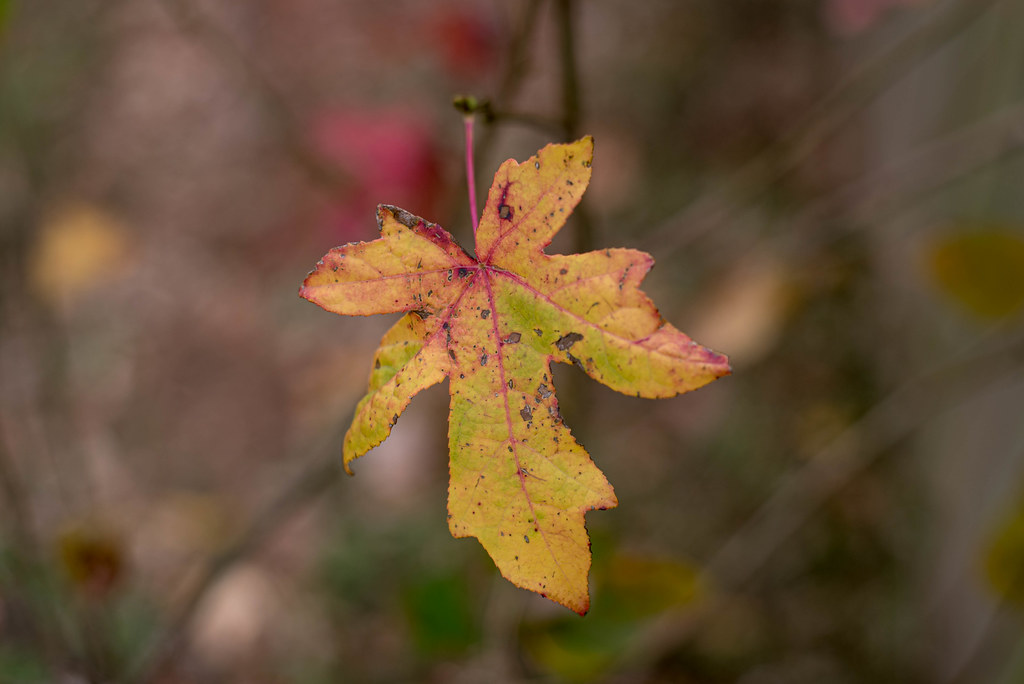 You’ve heard me say many times that you don’t need to go very far to get good photos, and that includes just stepping out into your own back yard. Even so, it’s been a while since I posted a picture here on Weekly Fifty that I shot literally in my own back yard. Most of the time I’m out with my family and my camera is used for snapshots of people, and not the kind that I share here on the blog. But on a mild afternoon late last year I had my D750 and 50mm lens outside, as opposed to the Fuji X100F I normally use when taking snots of my wife and kids, and realized I could use it to get a really cool picture of this leaf by the fence.

I did have to alter the scene just a bit to get this shot, which I don’t normally do but in this case I thought would be OK. This one leaf was initially part of a triad with two others sticking up near the top of the frame, so I gently picked them off to get just the single leaf in the shot. I’m actually looking straight down here, not up towards a tree, which is one reason this image caught my eye. Normally you would have to contend with the bright sky for a shot of a single leaf, but in this case the dirt and brown branches gave a rich visual contrast to the image that I don’t often see. (Or perhaps it would be more accurate to say I see it, but don’t take the time to stop and really notice.)

Choosing the right settings for this photo was a bit tricky, since the leaf was so large and my camera so close that a wide aperture would mean too much of it would be out of focus. I knew any larger than f/2.8 wouldn’t work, both for depth of field as well as overall sharpness, but I did try a few shots at f/4 and f/5.6 just for fun. In the end I preferred this one, shot at f/2.8, the most because of the way it obliterated the background even though the right edge of the leaf isn’t quite in focus. It was worth the tradeoff, and it’s not something I notice easily anyway.

I didn’t spend too long outside taking nature shots while my kids were climbing the ropes and swinging in the swingset, but it was fun to try something different but also quite the same. I think I need to take my own advice and look for photo opportunities right in my own backyard a little more often :)