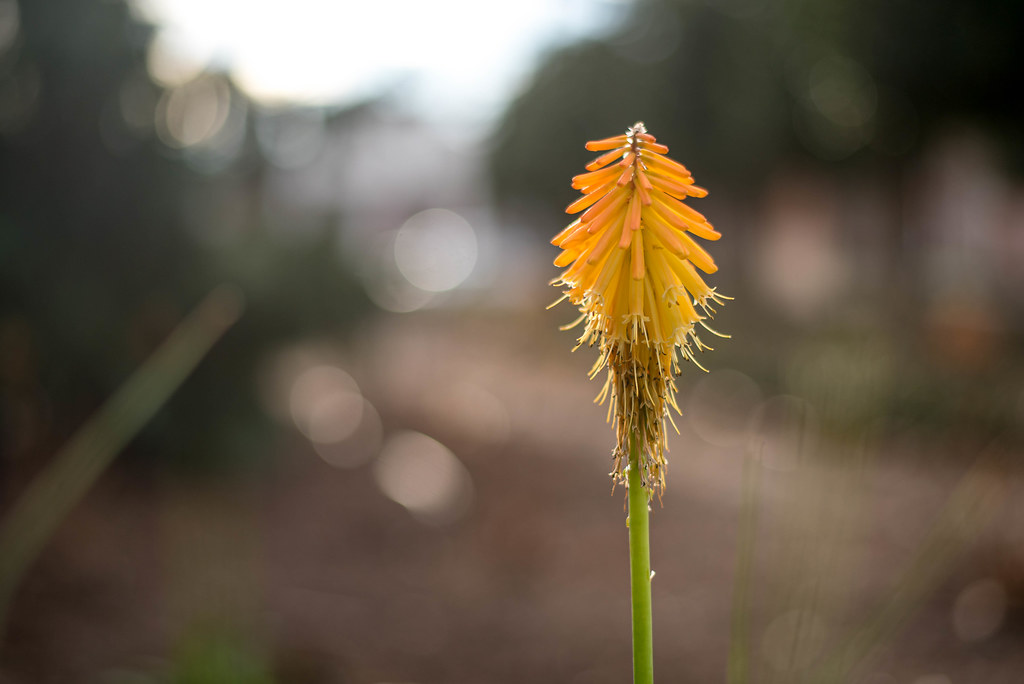 If this looks kind of similar to last week’s photo, you’re probably not too far off the mark. I shot this about two minutes after that one, about ten feet away, looking in the same direction using some of the same techniques. I even have the subject off center, just like last week, with the notable difference here being the color of the focal point: yellow instead of red. This image also bears a striking resemblance to another photo I put up last fall, with this specific type of flower backlit against a blurry horizon. The big question for me when I took this image was one of aperture: f/1.8 would obviously give me the most pleasing background blur, particularly with the spots of light. But the sharpness sacrifice isn’t always worth it and in this case wasn’t one that I was quite willing to make. So I stopped down to f/2 which might not seem like a big difference, but even that little bit of change can have a big impact on overall sharpness–not to mention the slightly wider depth of field too. And in a photo like this, those tradeoffs can be well worth it.

One of the exciting parts of shooting this picture was working to get just the right spots of light in the deep background. That bright blurry light just to the left of the flower was no accident: I set my camera to continuous high-speed shooting and waited for a car (not a bus or a big truck) to drive by, and after a few attempts I got just the right reflection I was aiming for. It’s those elements that you can sort of plan, but not quite, that make photography a lot of fun. I also enjoyed getting to shoot with my D750 and its famous flip-out screen which my D7100 sorely lacks. (Famous only insofar as it was a bit of a revelation when that camera was originally released, though in 2021 it’s hardly a feature worth writing home about. Or in this case, blogging about. Nevertheless, I do enjoy using it so I’m going to mention it here just because I feel like it.)

This is also a good example of how the time of day, combined with the time of year, can have a significant impact on your photography. I shot this on December 1 when the sun is low on the horizon in the afternoon, and for a good chunk of the year you would need to either get up early or stay up late to get an image like this. And in either of those situations you might not have the same level of traffic in the background, which would make getting the shot just a little more tricky. It’s neat to see how nature can have such interesting, and not entirely expected, effects on the photo-taking process.