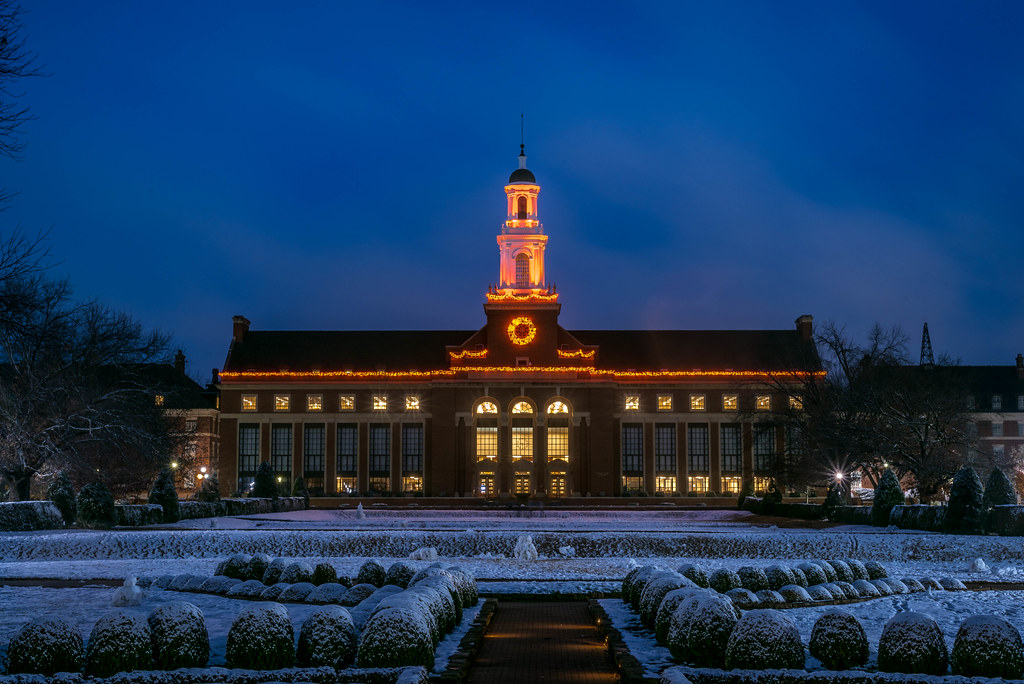 Photos of the Low Library are so common it’s practically a cliché. Not that any picture of this particular building is more or less valuable than any other (and I have certainly taken my fair share of similar images over the years) but a view of this library from the formal gardens isn’t going to win any awards for originality. However, there is something about this scene that you won’t find too often: snow. And not just snow, but enough to make snowmen–many of which can be see scattered about the lawn. Here in Stillwater we just don’t get snow very often, and when we do it’s usually not enough to use for fashioning any sort of humanoid likeness. The snow that we might get once or twice each winter is generally one or two inches of white powder, most of which disappears within a day.

When my kids woke up on the morning of December 14, the ground was already covered with a few inches of snow which meant they were practically bouncing off the walls (and certainly the furniture!) with excitement. A few hours later and we had about five inches of snow–the really thick kind that’s not great for sledding but awesome for rolling into snowballs and snowmen, which my wife and I did several times with our kids that afternoon. The next day most of the snow was still on the ground, which is also quite atypical for central Oklahoma, and this was also the day my buddy Ryan and I went out to campus to take photos as the sun went down.

He had his Mamiya Medium Format camera and a Nikon F1 film camera, and I brought my D750 and Fuji X100F. We spent about two hours walking around campus looking for photo opportunities and just shooting the breeze while struggling to keep warm in the rapidly-lowering temperatures. About a half hour into our photo walk around campus we got to the center of the Formal Gardens and shot the scene you see here: First Ryan on film, and then me on digital.

I used my D750 and my 50mm lens, sans ND filter because I didn’t have one when I took this, and wanted to get a shot with some cloud streaks in the barely-lit sky. I also wanted to remove people from the frame as much as possible. The best way to accomplish both? Use a long exposure! I stopped down to f/16 which let me use a 10-second exposure that did a great job of creating a silky smooth sky, but didn’t quite remove the people: you can see a few blurry spots right in the center, which are some college students milling about. A longer exposure would have almost certainly made them disappear entirely.

I like pretty much everything about this: the snow on the ground, the texture of the grass and bushes thanks to the off-camera lighting on the right side, the starbursts on the lights in the right and left side, the orange glow of the library lights, the smooth sky…all the elements come together to make a photo that you just don’t see very often. The only thing I’m not happy with is a subtle orange smudge on above the library on the right: I forgot to clean my lens before taking this shot. Arg! It’s not a deal-breaker though, and now I have something to try differently next time :)