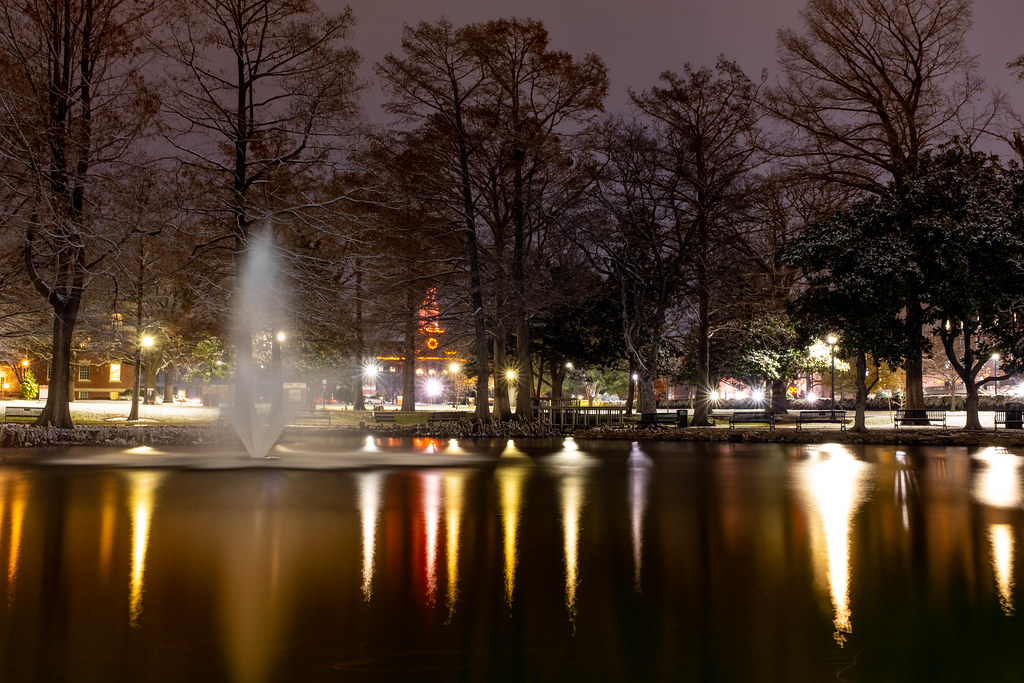 This is a photo I have thought about taking for a long time, but never really made happen until a chilly evening in mid December of last year. I shot this while I was out walking around on campus with a friend, mostly to just shoot the breeze and catch up on things, but also with our cameras in tow so we could take some long-exposure photos of campus. If you’re the kind of person who likes to have a sense of place and geography, you might notice that the Low Library from last week’s shot is in this image too, albeit much smaller. This was taken southwest, as the crow flies, from where I stood to get the picture of the library; just behind me is University Avenue. I knew I wanted to get a picture of the fountains, but I wasn’t quite sure what I wanted the photo to look like until I got to this spot. I tried one or two long exposures on the west side of Theta Pond but this scene was the one that really caught my eye.

I used my Fuji X100F on a very short tripod to get it low to the ground, set the aperture to f/13 and ISO to 200, activated the three-stop ND filter, and calculated an exposure time of four minutes to get the shot*. I activated the shutter with my cable release so as to minimize any shake from me pressing on the camera. And also because it was really cold out, and I didn’t want my fingers to get frostbite while holding down the shutter button for several minutes at a time! Getting pictures like this is an exercise in patience because you have to wait so long to know if you got a good shot, and my Fuji takes about as long to process a picture like this as it does to take it. So basically, this picture took almost ten minutes of work, which meant I couldn’t just go around snapping a dozens of frames willy-nilly. I had to be careful about planning things out and framing the shot to get it just how I wanted.

And oh man, it turned out great. I’m super happy with the smooth glass-like surface of the water, the fine mist from the fountains, the starbursts of light punctuating the midsection of the photo, and the library in the background. The trees have a cool snowy accent to them which was gone by the following afternoon, and you can also see snow on the ground along the middle of the photo too. I’m honestly not sure what I would even do differently if I went back to take this photo now, other than to maybe tilt my camera upwards a bit more to get the treetops and some more sky, perhaps? I dunno.

I think the best thing about this image isn’t the picture, but the experience. I rarely go out at night to take long-exposure photos, and it was so cool to do that with my friend on a chilly winter night. I hope we get to do more of this, and really see what nature has to offer when you slow down. Way, way down.

*My camera’s meter indicated that a 30-second shot would be about three stops underexposed, which meant a proper exposure would be about four minutes.