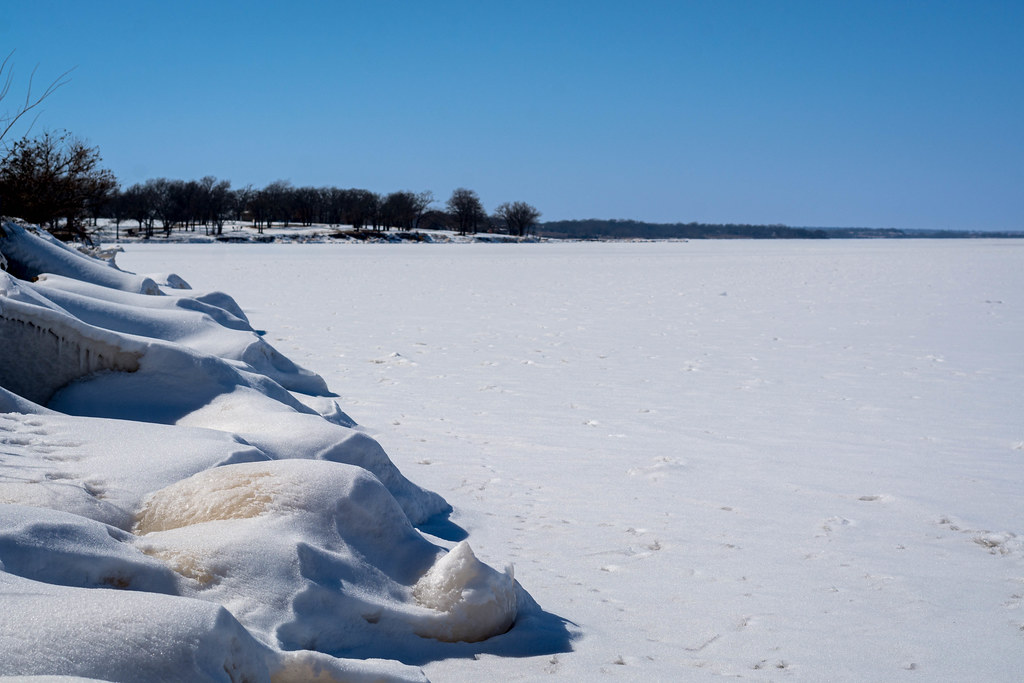 During the extreme cold snap of mid February I didn’t actually take many photos. It was just too cold! Even though I often thought about going out with my camera while we were stuck inside huddled under blankets trying to conserve power, I mostly just erred on the side of comfort at the expense of photographic creativity. That changed a bit as the weather warmed, and when temperatures rose into the 40’s my wife and I took our boys out to Lake Carl Blackwell west of town just to let them see what a frozen lake looked like. Living in Oklahoma you just don’t see things like this too often, so we wanted to take the opportunity while it was available.

And nature did not disappoint!

Ok so first things first: we did not go on the ice. Even though it seemed plenty thick for walking around, and it certainly withstood being pounded with pretty large rocks, there’s no telling when you could come across a weak spot or a crack or other such unforeseen issue, the results of which would be cold at best and tragic at worst.

What we did do, however, was spend a while just walking around and admiring the scenery while letting the boys whack the ice with long pieces of wood we brought with. I also kept my eyes open for photographic opportunities, the first of which you see here. I really liked the contrasting elements, particularly the deep shadows along the left side. The lake itself is smooth as glass, and the undulating ice-covered mounds are so starkly different they almost seem photoshopped in. I was using my D7100 which does not have a flip-out screen, which was a big miss on my part. I really should have brought my D500 or D750! I had to get down low to get this shot, which was nearly impossible on the outcropping I was standing on, which meant I had to use Live View. And since the glare was so bad I literally could not see what I was photographing. I also didn’t know what aperture to use. I stopped down to f/8, focused on the closest ice mound, lowered the camera, and took a few shots. This one actually worked! How, I’m not exactly sure. But it was neat to see this scene and capture it to show people someday who might not believe that back in 2021 Lake Carl Blackwell really did freeze over.