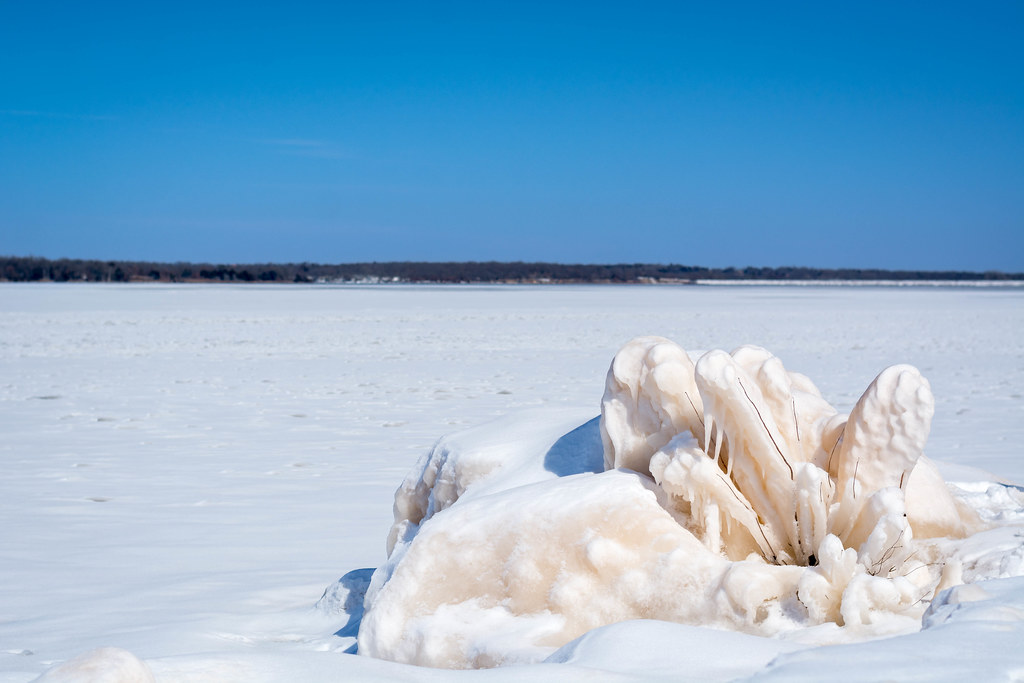 This is another look at a very cold lake in Oklahoma. In other words, this is something you just don’t see very often down here. As with last week’s photo, this is Lake Carl Blackwell completely frozen, a few days after one of the longest stretches of cold weather in recent memory. When my wife and I took our kids out to the lake just to walk around and look at the strange sights, we didn’t really know what to expect other than that the surface of the water would be smooth. Which it was. And covered in snow. Which it also was. But this thing? No, I can safely say I had no idea I would see this.

So what is it? Good question. I think, though I’m not entirely certain, that this is some kind of plant or shrub that was covered in a layer, or many layers, of ice. And I mean that ice was thick. We tried whacking it with a pretty large stick, and it didn’t budge. I don’t know what weather conditions would cause a bush (albeit having lost its foliage to the winter season) to freeze such that it looks like this, but it wasn’t at all what I expected. I also have a hunch that winds from the lake battered this plant, and the rocks against which it is nestled, with a freezing mist for several days as well which led to such a thick covering of ice.

The trick was to find a way to photograph it, and I think I did OK except for one thing: I should have used a smaller aperture. I shot this at f/4 but f/8 would have been a little better, mostly because the background would be a lot sharper. Normally I’m a big fan of blurry backgrounds, but not in this case. I think the shallower depth of field belies just how smooth the surface of the lake really was. I have to give myself a bit of grace though, since I had never taken a picture like this and wasn’t really sure what exposure settings would be ideal. In fact we so rarely get any significant snowfall down here that any photo of snow is somewhat of a challenge I think I did OK though, and hopefully next time (if there is a next time, which, Lord willing, won’t be for many years!) I’ll have a better sense of just what to do to get a good shot of a scene like this.