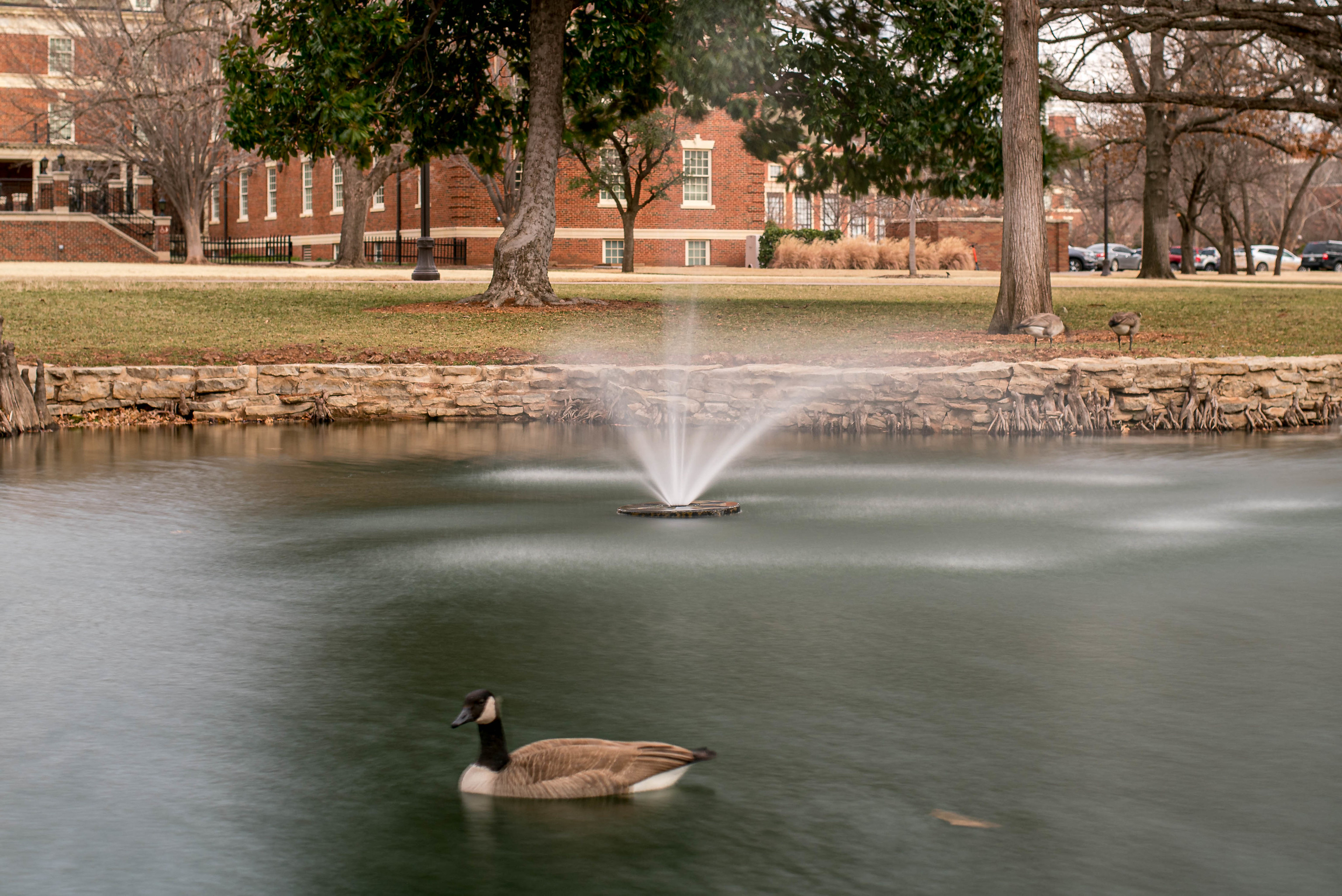 Something kind of interesting happened as I was out shooting with my 10-stop ND filter on a chilly February morning. I didn’t have anything specific in mind other than to shoot a picture of this particular fountain on campus, but once I got there and set up my tripod I wondered if there might be a way to incorporate geese into the shot. I took a few shots and liked how the swimming geese added some interesting streaks across the image, but something about the end result just seemed cheap and boring. I thought I could do better. Trouble is, geese aren’t really known for cooperating or doing what you want them to do at all. They mostly just kind of ignore you, hiss at you, or run away. Still, I did think I could get something if I worked at it for a bit.

As I reviewed my images briefly on the back of my camera I thought it would be kind of neat if I could get a shot where one goose was frozen (not literally, but you know what I mean) but everything else was smooth and showed motion. I didn’t know what I could really do to make that kind of a shot happen though, but after some experimenting I realized I would need to strike a balance with my shutter speed: too long and there’s no way a goose would be still in the image. Too short and the picture wouldn’t show movement the way I was hoping. And then there’s the matter of the animals, and trying to work around their obtuse agenda in order to get a shot.

Finally one goose did swim by and, as luck would have it, actually held still for a bit. I quickly dialed in a shutter speed of four seconds and an aperture of f/4.8, and hoped for the best. I pretty much just sat there and held my breath while the shutter was open, hoping against all odds that the goose would remain still. And I’m telling you, not one second after the shutter clicked and the exposure ended that goose in the foreground turned and swam away. It was almost like it was staring at me as I stared back, or maybe it was even posing for the shot. Whatever the case may have been, it resulted in a shot that that, while not perfect, does fill me with a sense of pride and gives me some new techniques to try as I explore the concept of long exposures.

Also on an unrelated note, this post marks the completion of eight years of doing this blog. Eight years, gone in a flash. I’ve learned an awful lot and I appreciate all the comments and questions from you, my readers, and look forward to many many more years of doing Weekly Fifty.