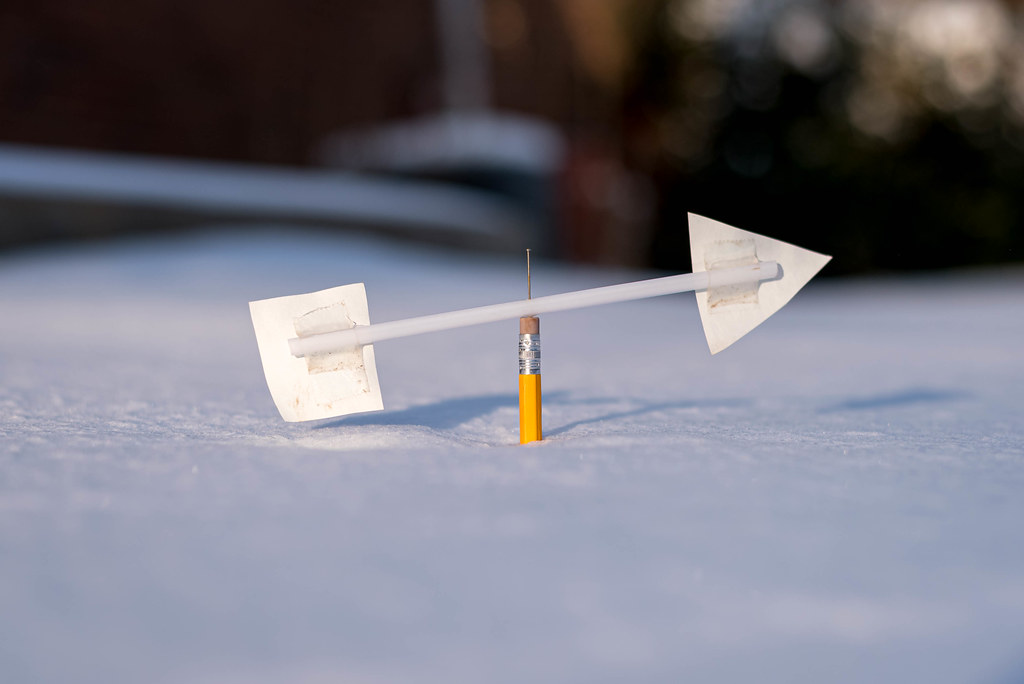 I shot this in mid February when Oklahoma was in the middle of one of the longest and harshest cold snaps in recent memory. We had a near-record number of days below freezing, some with a high hovering around Zero. (If you live in the midwest United States you know what I’m talking about–we had it easy compared to states farther north!) My wife and I didn’t leave the house for a few days, and neither did our kids, but I really wanted to find a way to document the cold and snow and generally really bad weather conditions. I wasn’t about to spend more than two minutes outside in order to do it though! Then one evening I noticed this thing in the backyard and realized it might have the answer.

What you’re looking at here is a simple weather vane my youngest son did as a school project back in October. The idea was that with a pencil, a pin, a straw, and some cardstock he could create a basic weather vane to show wind direction. It was one of those simple school projects that I would never have thought of on my own, but ended up being a pretty cool demonstration of some basic science principles. He stuck this thing in the ground, recorded a few measurements, and then just sort of left it sit.

And sit it most certainly has. This weird little school project has survived rain, wind, ice storms, snow, and record freezing temperatures and (as my dad would say) by golly it still works. And I’ll be darned (another dad-ism) if that straw doesn’t keep on rotating to show wind direction even after all this time. For whatever reason this thing is like a Timex watch (have I shown my age yet?) and I’m curious just how long it will hang in there. So it made sense to me to use it as a way of showing a bit about the strange winter we have been having.

To get this shot I grabbed my D750 and 50mm lens, ran outside with the sun at my back, angled myself so my own shadow wouldn’t be in the picture, flipped down the rear screen, turned on Live View, and started shooting before my fingers froze into little pink popsicles. I didn’t really think too much about creating a compelling composition–mostly I just wanted to get back inside. I did wait just a few seconds for the wind to aim the arrow sideways because the other shots where it was facing towards or away from the camera just didn’t seem all that interesting. I shot at f/2.8 to balance sharpness and depth of field, and used continuous high-speed shooting in the hope that something would turn out. And I’ll be a monkey’s uncle (I’m now officially my dad) if this photo wasn’t almost exactly what I hoped it would be.