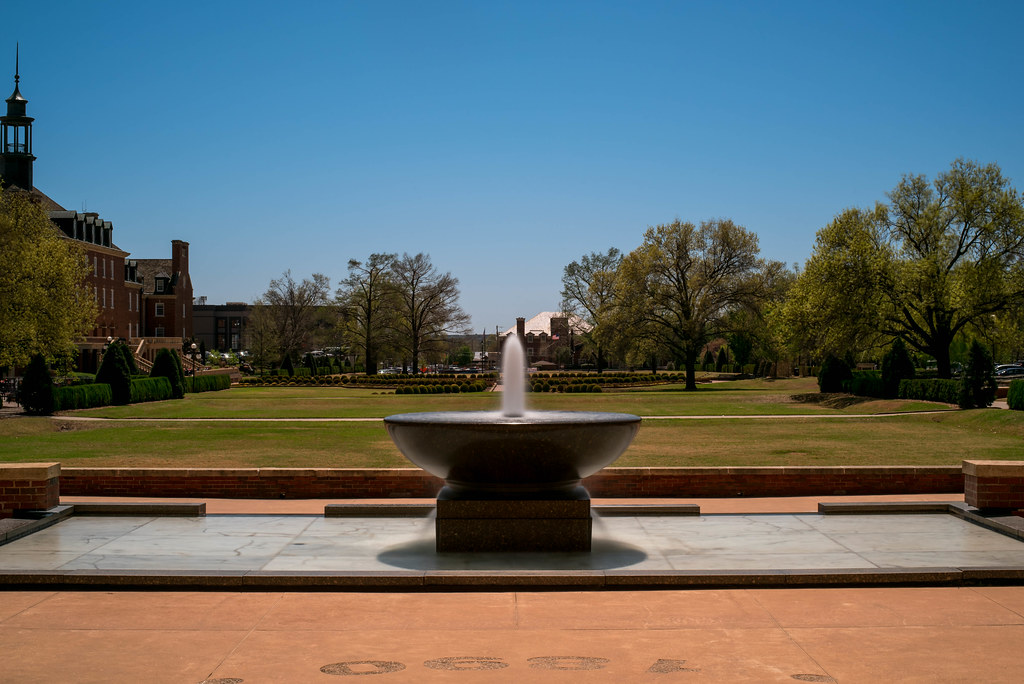 I’m still finding out interesting ways to use my 10-stop ND filter, and most of them involve running water. Not that there’s a ton of that sort of thing where I live, but the opportunities I do have often give me some interesting results or at least some things to think about. Aside from the fountains in Theta Pond, the other easily accessible scene on campus that lends itself to long-exposure photography is the fountain at the south entrance to Low Library. I walk or bike past it most days, but it runs dry during the winter months because freezing water is pretty bad for pipes. In early April the powers-that-be decided to unleash the circulating torrent for the season, and once I saw that the fountain had been turned on I immediately thought about getting a long-exposure shot of it.

Initially I was going to use my D7100 but thought that its 75mm equivalent field of view would be too constricting, so when I did get the opportunity to take this shot I made sure to bring my full-frame D750 instead. I thought about shooting this scene during the early morning hours as I biked across campus, but thought that a picture later in the day would be more interesting. There’s a light pole just outside my window at my office and as the morning passed I waited until its shadow was pointing due north, and then grabbed my camera, tripod, ND filter, and went to the library to get to work.

I had a pretty good understanding of what I was aiming for, but there were some variables I couldn’t plan for or control. For one, pedestrians. The lawn in front of the fountain is usually full of students but on this particular day it was relatively empty. So that was definitely a win. Also, plentiful passers-by posed a problem but that was partly mitigated by the six-second shutter speed; unless someone stood still or walked very slowly, they were unlikely to leave their imprint on the image. Fortunately when I shot this there was an honest-to-goodness break in foot traffic, which was another unexpected win. Finally, the element of positioning: where to place my camera? I went as far back as I could without running into the steps leading up to the main doors, and tried to center the fountain in the frame as evenly as possible. In hindsight I wish I would have scooted over juuuuuuust a bit to the right, as my slight OCD tendencies cause me to clam up a bit when I look at this photo and realize that the fountain is ever so slightly off-center. However, I partially blame the landscape planners for that one: the footpath through the formal gardens in the background isn’t actually centered with the library. Still, it would have been nice if everything lined up just so.

I got about five images (all at f/16, ISO 100, 6 second shutter speed) but this one stood out for one reason: the lack of wind. In each of the other images a gust of wind blew the water to the left which looked kind of neat at first, but the more I looked at this picture the more I appreciated its simplicity and symmetry. I like the pillar of water in the middle and the slight skirt of water gently cascading off the pedestal, and it gives the scene just a hint of movement while also appearing calm and serene at the same time. The clear blue sky, green grass free of people, and smooth surface of the square collecting pool were icing on the cake, and in the end this is probably one of my favorite photos I have taken of this view of the OSU campus.