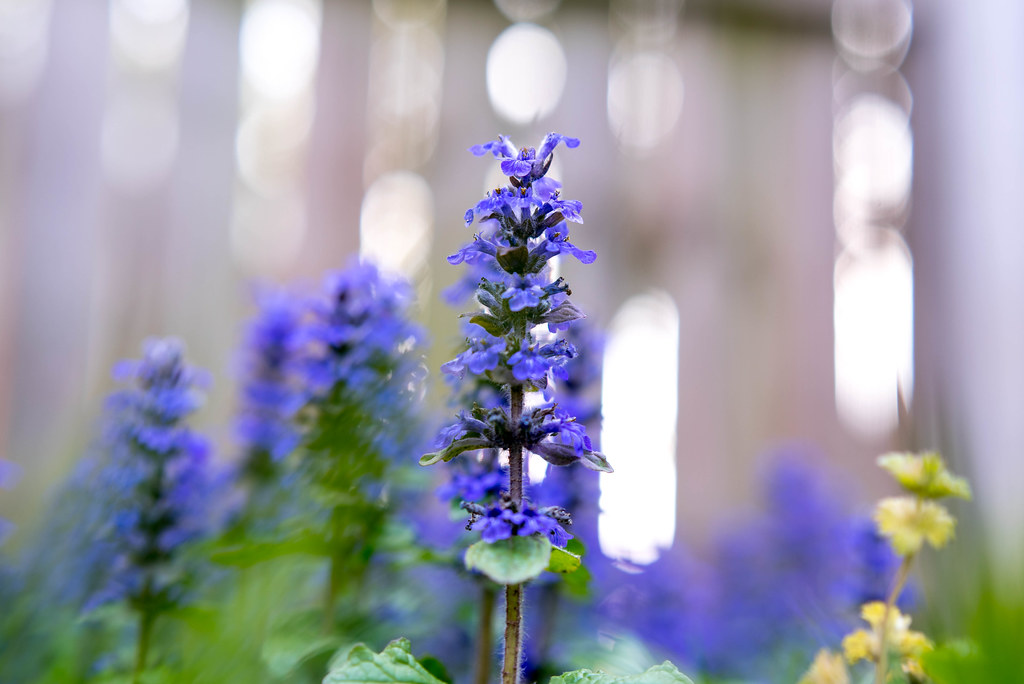 This was a photo I didn’t plan, didn’t prepare for, and didn’t even think I could take. It was a nice moment of photographic serendipity that served as a good reminder of why I like this hobby so much, and something I’d like to try again in the future. You’re looking at a small patch of purple flowers in the corner of my backyard, and even though these things show up every year I still don’t know what they are or how to get a good picture of them. It’s not like last week’s shot where you can just point your camera at one of these and get a nice picture almost every time. Instead, these purple flowers are grouped together in tight masses, and what you usually end up with is a mass of muddy purple instead of a well-composed photograph. Nonetheless, on a warm April evening while my wife was reading to our youngest son in the backyard I thought I would grab my camera and see if I could wrest a photograph from this patch of purple flowers somehow.

I got down low, activated Live View on my Nikon D750, put a +2 close-up filter on my 50mm lens, tilted the rear screen up, and took a few pictures. It wasn’t really working out though, and as I reviewed my images I just wasn’t happy with what I was getting. It was, as I expected, mostly just a purple blob in the lower half with a light brown blob (i.e. my fence) in the top half. I kept at it though, and soon stumbled across another element I had not considered: the setting sun.

Turns out that the light streaming through the small spaces between my fence boards created a brilliant bokeh effect, but I didn’t realize it at first because (and I know this sounds dumb but it’s true) I was facing the wrong direction. I never considered composing my shots such that the sunlight was in the background, and as soon as I tried this new approach everything changed. I’m thrilled with the vertical out-of-focus light strips in the background, which look almost otherworldly and give this simple picture a mood that I would have never predicted. The one thing I’d like to re-do in the future, if I get the opportunity before these plants wilt, is find a way to isolate one single flower much like last week’s image of an Indian Paintbrush. This picture isn’t great in its own right, but it hints at greatness and gives me some fun new things to think about for future photos that I had not previously considered.