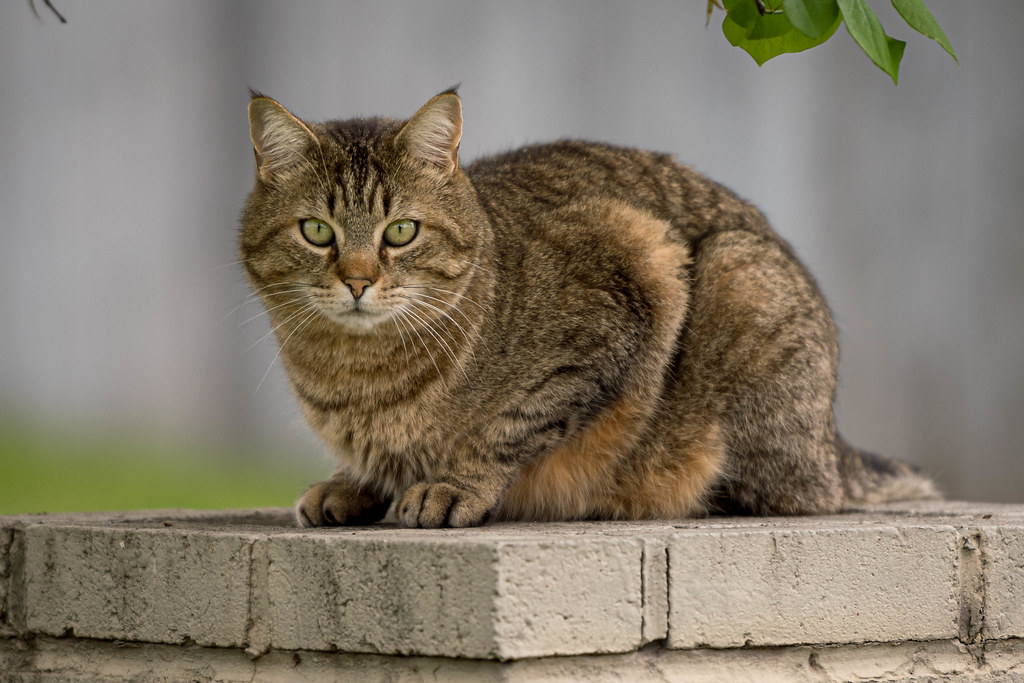 For years we have seen this particular cat roaming around the neighborhood, often minding its own business and generally keeping to itself on a daily basis. My buddy next door has kind of adopted it, feeding him scraps of food and giving him shelter in his back yard, but we’re not sure who actually owns the cat or where it came from. Sometimes it hangs out on our front porch, and our doorbell camera is filled with videos of this cat lounging at night or tussling with other felines at all hours of the day. I don’t know his name and haven’t ever gotten close enough to pet it, but it’s nice to have this cat adding a bit of flair to the neighborhood. So on a nice overcast day this spring I was glad I had the chance to take its photo in a way that I haven’t really done before.

I have a handful of shots of this cat sitting or laying on the ground, but as my wife and I were heading out to go to the lake with our boys we saw the cat sitting on this brick pillar in the yard across the street. Like usual it was just hanging around not bothering anyone so I didn’t want to pester it with my camera, which meant there was only one good option: My D500 and 70-200 f/2.8 lens. That combination turned out to be ideal: I was able to get close enough to the cat to get his picture without scaring him, and also get a nice shallow depth of field as well. The cat’s eyes are tack sharp while his hindquarters and tail begin to recede into the blurry background, and he is sitting in a stance that says “I see you, and I’m not scared of you, but come any closer and I’m outta here.”

I didn’t spend more than 30 seconds getting this photo because we were trying to get going and everyone else was already loaded up in the car and ready to head out, but I’m glad I took the time to take the shot. It was a good chance to get on eye level with this cat and take a more interesting photo than just seeing him sitting on the grass, and also a fun opportunity to take a picture of an animal compared to all the flower shots I have been posting lately :)