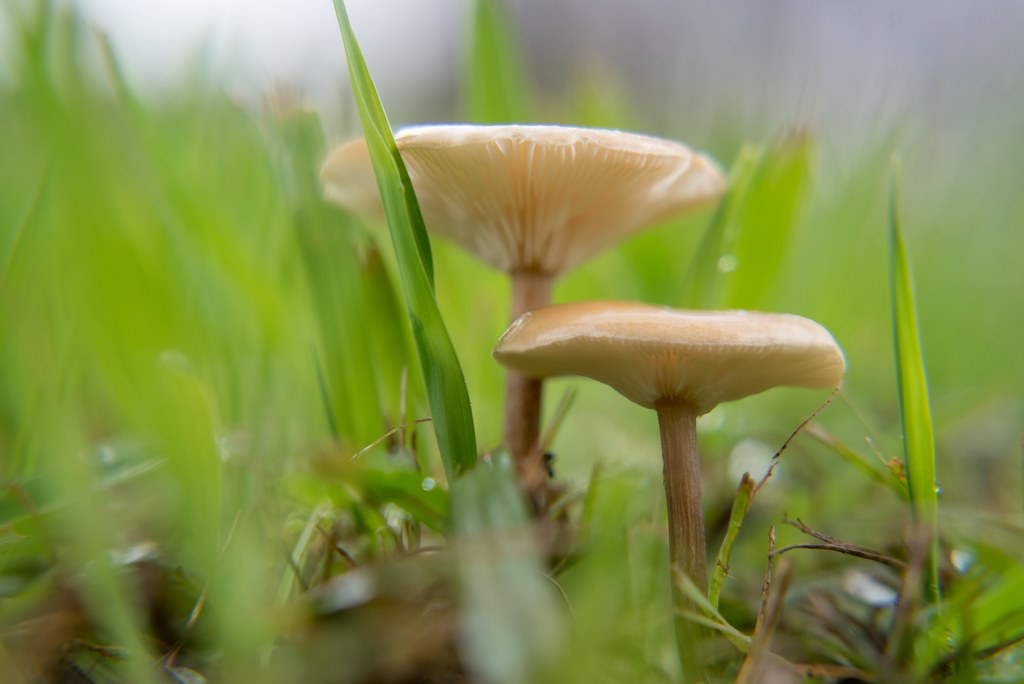 This photo can’t exist. What you’re seeing isn’t a real picture, but a combination of two images that I stitched together in Photoshop. Or, rather, overlayed on top of one another and then edited with a mask so one part of one picture was superimposed on top of the rest of the other picture.

So now the question: Do you know what part was Photoshopped? I’ll give you a hint: it has to do with depth of field.

When you take pictures at very close range, like I did here, you have to deal with a very unwieldy depth of field. That is, the in-focus part is so narrow that even with smaller apertures you can only get a fraction of the photo in focus. I shot this picture with my Nikon D750, 50mm lens, and either a +4 or +10 close-up filter. (I can’t remember exactly, but I think it was a +10.) and had a few items in mind:

You can’t actually get all three of those in a single exposure; something has to give, and as a result I ended up taking two pictures. One focused on the mushroom in front, and another focused on the mushroom in back. Both were shot with the same exposure values and, even though I did accidentally move my camera just a bit between shots, both images were close enough for what I needed. Then I imported both into Lightroom, brought them into Photoshop, and performed the aforementioned image manipulation so as to get the best of both worlds: both mushrooms in focus with the foreground and background nice and blurry.

This is a technique known as focus stacking and it generally involves very still subjects, actual macro lenses (instead of close-up filters), a tripod, and dozens of exposures. This photo is actually a very poor example of focus stacking, but it hints at the possibilities that one can accomplish with this sort of process. It was fun to try it, and gives me some new things to think about for future images as well.