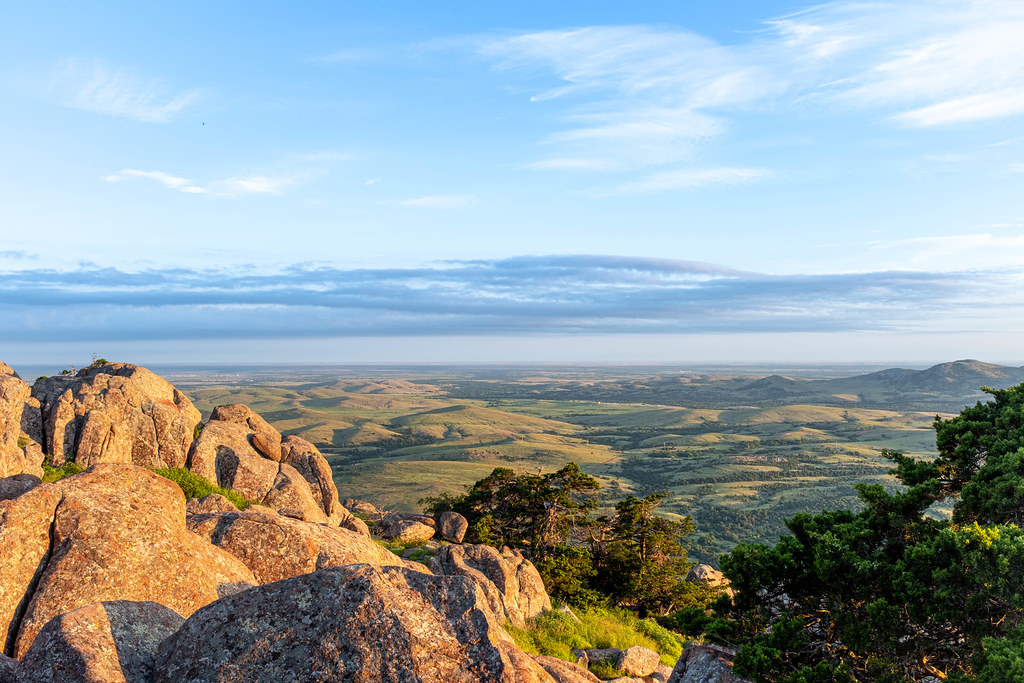 Would you believe me if I told you this picture was taken in Oklahoma? I don’t think I would believe you if you told me, and yet, that’s exactly where I shot this. I stood near the southwestern edge of Mount Scott, situated at the east end of the Wichita Mountains Wildlife Refuge near Lawton, Oklahoma, and took this picture with my Fuji X100F while my wife and kids climbed around on some nearby rocks behind me. This was the third of four visits to Mount Scott during our recent trip and I was glad I could capture a small sliver of what the magnificent view looks like from this spot high above the plains. The previous evening my wife and I both noted that as the sun was setting, the hills surrounding the mountain came alive with brilliant contrast, as the western side was bathed in light while the eastern side of every hill below was shrouded in shadow. During most of the day the view looks quite different as the surrounding scenery is evenly lit, but as the sun descends on the horizon everything is transformed and it really was majestic to behold.

To get this shot I used a tripod, a small f/8 aperture, a low ISO of 200, and a 1/60 second shutter speed. The 35mm (equivalent) field of view here is maybe a bit too tight to capture the grandeur of this scene, but it was what I had to work with so I tried to make the most of it. I also wanted to get something interesting in the foreground, hence the rocks and trees you see here. I tried a couple different locations for this shot but didn’t have a lot of time since the sun was going down and I didn’t want to leave my family for the whole evening while I fiddled with the camera. In the end I quite like how this turned out, and while the low-lying clouds obscure the blue sky just a bit I don’t really mind since it adds a bit of color and contrast to the image overall. And this gives me something to think about, and new ideas to try, the next time we return to this area. Which, hopefully, will be soon.