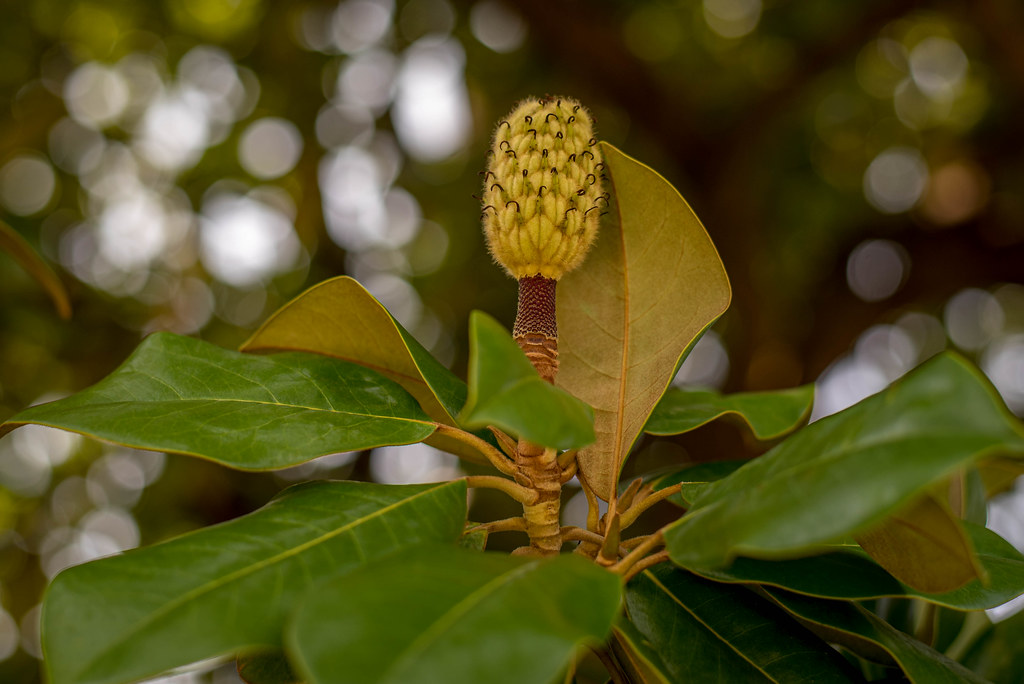 This picture is a bit of a departure for me. Normally I like to shoot subjects and scenes with lots of colors, but here it’s mostly just earthtones: browns, greens, and blacks. Looking at this image reminds me of the old Dynamic UNIX system (DYNIX for short) that my local public library used to use in the 1990’s as the tried-and-true card catalog slowly faded into obsolescence. Maybe this could be the logo for a Magnolia UNIX system (MAGNIX for short)? Note to any aspiring OS designers: contact me for licensing details :)

Anyway, this shot is fairly simple but it actually took a bit more planning and preparation than you might think. First, the subject: a magnolia seed pod midway through its life cycle. It’s not super interesting to look at without any bright red seeds poking out, and initially I was not going to take this picture at all. Then I thought about how I could frame the subject against the background in such a way as to make the seed pod stand out and be a bit more interesting to look at. I took a few shots at f/1.8 using the just-blur-everything approach but, as I expected, depth of field was too shallow and the seed pod suffered from a severe lack of sharpness. I stopped down to f/2.8 which mean the spots of light in the background weren’t as pronounced, but the tradeoff in sharpness was worth it to me. I then thought about where to position the subject (or, rather, where to position myself since I was not keen on moving this branch with one hand while trying to get a picture with the other).

My first thought was to repeat the idea from last week: put the seed pod against a bright spot of white light in the background. That idea didn’t really work out too well, as it left the viewer with a bit of a feeling of unease and uncertainty about what to actually look at. Then I realized I could put the subject against a dark part of the background, thus giving the image some complementary elements. The white spots of light on the left serve to guide the viewer’s eyes to the seed pod just to the right of center. It’s a more complete composition this way, with the different shades of green and yellow serving each other rather than competing with one another. I’m curious to return to this scene after a few days and see how it’s changed, and maybe I’ll even try to take another image of the same seed pod after a while to see how it looks after some time has passed.