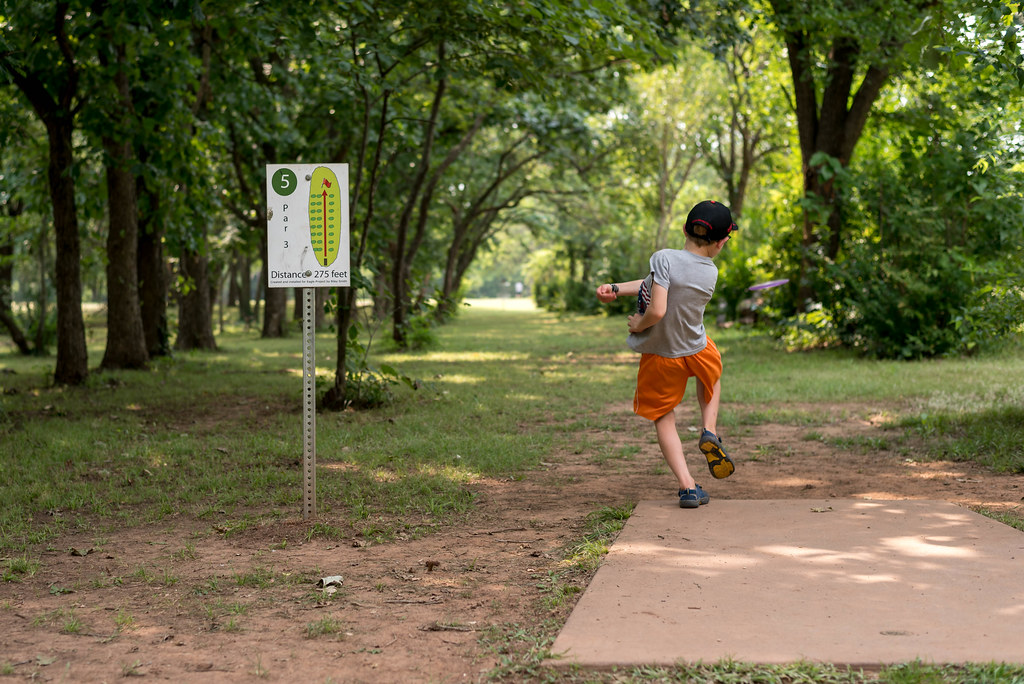 So, part of this picture was unintentional. Most of it, actually. All I wanted to do was take a picture of the “Hole 5 Par 3” sign with the disc golf hole way in the distance, kind of like an alternate version of the image I posted last week. Something about the trees on either side of the straightaway, combined with the overhead lighting, created an interesting scene that I thought would make for an interesting image. At least that was my plan until my son stepped up to toss his frisbee. (Or am I supposed to call it a disc? I have no idea.) Initially I was going to ask him to step aside so I could take a picture but then I thought I might as well incorporate him into it as a way of making the scene more interesting and dynamic.

I had my D750 and 50mm lens with me which was great for this type of shot. The angle was neither too wide or too narrow, and I was able to frame the shot almost exactly how I saw it in my mind. I used a wide aperture of f/2.8 and focused on the sign, knowing that most of the background would be blurry. That was kind of the point: give the viewer two things to see right away, with more to consider the longer they looked. I used continuous high-speed shooting which, despite topping out at only about 6fps on the D750, was just fine to get this picture. I was hoping to catch my son in the act of tossing the frisbee, and from what you see her I think it worked pretty well.

One of my favorite parts of this shot is the purple disc (did I just use the term correctly?) just to the right of my son. It’s a small line that’s easy to miss, but once you see it I think it elevates the image just a little. Clearly my son is in the act of throwing something, but seeing the frisbee like that adds a fun extra element of action to the whole scene. I’m really happy with how this turned out and this was a good reminder that even casual daily activities like this can yield some really fun photographs :)