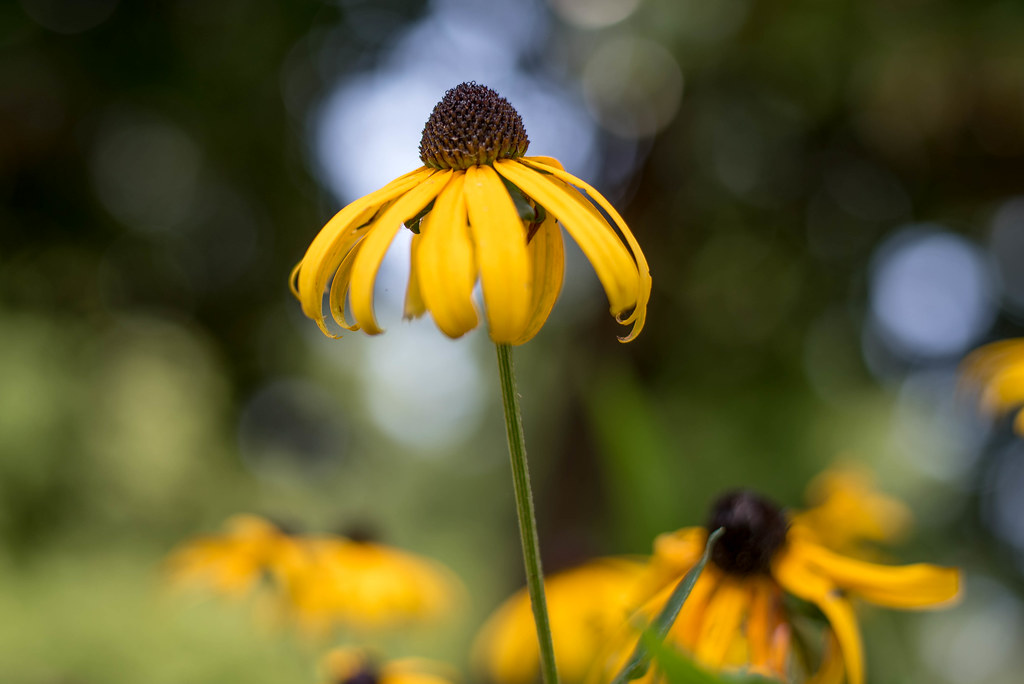 This picture was a bit of an exercise of pulling something from nothing. Or, rather, something from very little. I was walking near Theta Pond with my camera on a sunny afternoon in mid July, determined to find a photo opportunity even though I kept coming up with nothing. With Spring firmly in the rearview mirror much of the bright colors and unique sights around the pond just aren’t what they used to be, but I did eventually find this patch of flowers not far from where I have taken similar photos in the past. I didn’t have my close-up filters on hand which means it was tricky to compose a photo that felt interesting or compelling, and I tried the usual tricks like just shooting down from above or straight-on from the side.

I took a couple snapshots but nothing I would really be proud of, and then I realized I could take some inspiration from similar images I have shared in months past. By looking slightly upwards at this yellow flower I could put it against a brilliant background, and suddenly we were off to the races. The variables that mattered to me most were aperture (to control depth of field, not to get a fast shutter speed) and composition. I went back and forth between f/1.8 and f/2.8, preferring the former for background blur but the latter for subject sharpness. Something wasn’t really clicking though, no matter what I did. It just wasn’t turning out to be an interesting image, and I wasn’t sure why.

Then it hit me: the center of the flower was dark and I was framing the shot so it was against a dark part of the background. I realized the obvious solution to my problem, Like Bill Murray when he finds out Dr. Leo Marvin is vacationing in New Hampshire, and simply repositioned myself such that the flower was in the middle of the bright blue sky poking through the trees.

This isn’t a complicated shot, but it does show the importance of taking a few minutes to consider various compositional elements when getting a photo. I’m usually not one to give advice, but I do think it’s worth thinking about these sorts of things a bit more even if it means slowing down or taking fewer photos. The next time you pull out your phone or camera to snap a couple shots, make sure you’re considering all elements of the shot and not just the first thing that comes to mind. Chances are, you’ll end up with pictures you like a lot more as a result :)