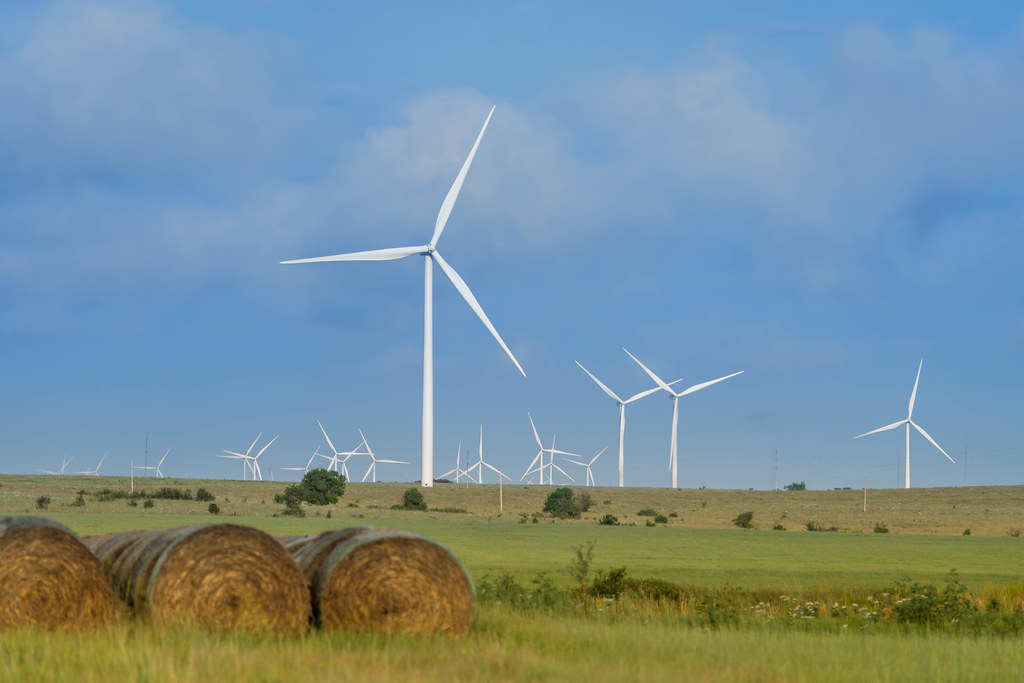 Spoiler alert: Over the next few weeks you’re going to see a lot of photos of wind turbines here on Weekly Fifty. I recently drove from Oklahoma to Nebraska, having not made that trip for a while due to the pandemic, and of course I brought my camera gear with me to take some shots along the way. I really enjoy taking back roads and two-lane highways as opposed to interstates because the scenery is so much more interesting, and because you can pull over almost any time you want to take photos or just stretch your legs. And sometimes you come across a scene like this that’s just begging to be photographed.

One thing I’ve learned about taking pictures of these wind turbines is that you have to find a way to put them in context or give the audience a sense of scale. You can’t just take a snapshot of a turbine and call it a day. You have to give your viewers some way to place the subject in a physical space so they know how massive these things really are. Trouble is, it’s really tricky to actually pull that off. This photo here is one solution, and while it’s not perfect I do think it helps capture the feeling of just how tall these things tower above the fields and hills of the midwestern prairie.

There’s a couple key elements in this picture that help it be a bit more effective at conveying scale. First, the foreground. I positioned myself (along with my Nikon D500 and 70-200 f/2.8 lens) in such a way as to have those large round bales in the lower-left corner and slightly out of focus as well, thanks to the depth of field afforded when shooting 120mm at f/2.8. Those foreground elements give the picture a sense of depth and perspective, and without them the image would feel kind of empty.

Next, the background. While I had very little control over this, I was glad that I could capture a scene in which there were dozens of wind turbines receding away on the far side of the hill. When you see how tall the turbine in the center is, and then see many more turbines behind it, you start to get a sense for the true size of this power-generation operation. It feels like these turbines go on for miles and miles which, if you have ever seen a field like this, actually is the case. This wouldn’t happen without the downward slope behind the subject and the many turbines behind it, and it was really cool to be able to capture this in a photograph.

Finally, the subject itself. The gleaming white turbine just left of center is the one that caught my eye initially as I was driving down Highway 15. It was facing the road as well as the sun, and while I could have cropped this image to make the subject smack-dab in the center of the image, I left it just off to the side a bit so as to give the wide-open blue skies and clouds a bit of room to breathe within the frame. All in all I’m quite pleased with how this picture turned out, and if you ever get the chance to see a scene like this in person I hope you’re able to pull over, get out your camera, and take a few shots to help remember it.