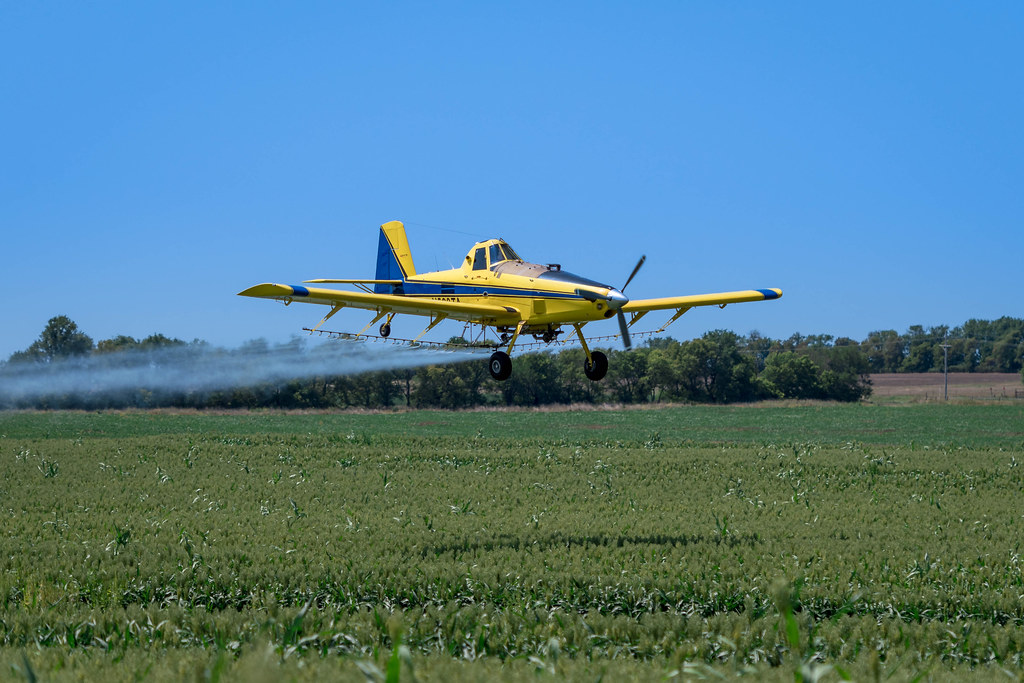 Ok I’m going to be honest here: I don’t exactly know what’s happening in this picture. I mean, I get it on a conceptual level but I don’t know any pertinent details. This airplane, the same one from last week’s photo, is spraying a mist of…something…over a field of sorghum. Is it fertilizer? Pesticide? Who knows. (Not me, anyway) All I know for sure is this was a fun photo to take.

This started with me driving from Oklahoma to Kansas, taking small highways and back roads as much as possible in order to see the scenery and have the ability to pull over for a break whenever I want to. As I was going east on Highway 15 I saw this crop duster doing its thing over a field just south of the road, so I pulled over to snap some photos. Ok, a lot of photos. Hundreds of photos. As many as I could given the time I had available, which wasn’t exactly unlimited given that I had places to go and people to see. I used my D500 and 70-200 f/2.8 lens, zooming in and out to capture images while keeping a constant f/2.8 aperture to freeze motion and blur the background and foreground ever so slightly. Having never photographed a scene like this before I wasn’t sure it would work, but I think the results turned out great. Certainly much better than I could have expected or hoped for, especially given that I never expected to be photographing a crop duster in the first place :)

As I was going through all my photos trying to pick out my favorites, I settled on this as one of my top three for a couple of reasons. First, the 3/4 view of the plane helps show it as a three-dimensional object compared to the profile view from last week’s shot. Also, I wanted to capture a sense of just how low this airplane was flying, and once you notice its shadow on the sorghum plants you can clearly tell that it’s only a few meters off the field. Certainly not a normal situation for an airplane to be in! Finally, I of course wanted to see the trail of fertilizer (or pesticide, or whatever it is) behind the airplane which clearly convey a sense of motion and energy.

This was an incredibly fun picture to take and a good reminder about keeping your eyes open, looking for photo opportunities when they present themselves, and being prepared with the right gear to get the shot.