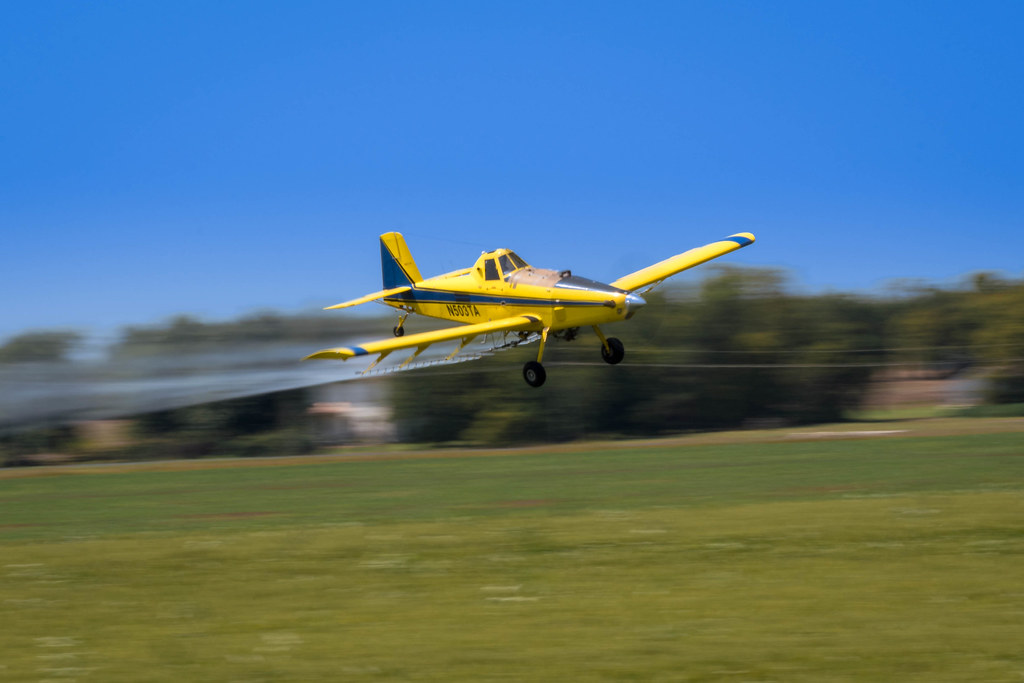 One of my favorite movies of all time is Independence Day, in no small part due to Randy Quaid’s character Russel Casse, a former fighter pilot who now spends his days piloting a crop duster and occasionally spraying the wrong field. At the end of the movie, in a move of shining heroism, he sacrifices himself to defeat the alien invaders and save the day in a scene that still gives me chills when I watch it. I like to think that in an alternate reality Mr. Casse somehow survived the explosion (maybe the aliens teleported him? Maybe he has a magical ejector seat?) and he spent the rest of his days quietly flying his single-engine crop duster somewhere in the midwest. And if so, maybe he’s piloting this very airplane you see here.

It could happen, right?

Doubtful as that scenario might be, it’s still fun to imagine. And this photo was enormously fun to take. After watching this airplane treat the sorghum field by Highway 15 in central Kansas for about ten minutes, and after getting some decent shots at high shutter speeds to freeze the action, I wanted to see if I could get some panning shots to really cap off the experience. I’ve shot plenty of panning photos of my kids on their bikes in front of my house, but never an airplane flying low over the ground like this! Since I already had plenty of photos where all the motion was frozen, I figured I might as well try a panning picture and see what I could get.

The first thing I had to do was switch over to Manual Mode. That way I could specify the aperture and shutter speed I wanted in order to get a panning picture. I shot at f/22, 1/45 second, ISO 100, and my light meter showed a pretty good exposure at those settings. Then I waited until the airplane was coming in for another pass, made sure my camera was on high-speed shooting, and held down the shutter button while I followed the plane through the viewfinder. I used single-point autofocus since the motion of the plane was entirely predictable, rattled off several dozen shots as it flew past, and then quickly reviewed my images to see if I got any that worked.

I repeated this process one or two more times and then it was time to head to my car and get back to my drive. I didn’t really bother to see if any of the shots were tack sharp since the point was kind of moot: I needed to get going, whether I got any good shots or not. A few days later as I was looking through my images in Lightroom I saw the image at the top of this post and it kind of floored me. It turned out great! The plane is almost tack sharp (but not quite, though I’m fine with what I got) and there’s a clear sense of motion as the background whips by and the cloud billows out from behind the plane. More than that is the angle of the aircraft, which I thought was really cool. It’s kind of a 3/4 view instead of full profile, and that almost makes it seem like the plane is careening through a high-speed turn, possibly being chased by Dom Toretto or one of his racing buddies. I still can’t quite believe I got this shot and it makes me smile to look at it, and think about how I could do this even better if I’m ever in this situation again.