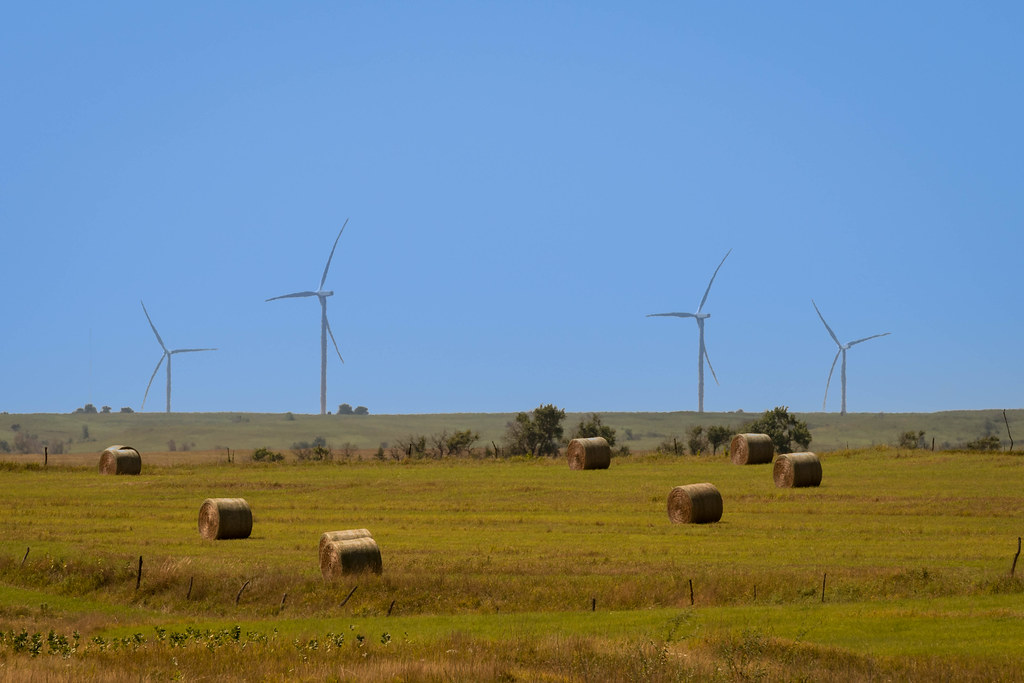 If you’re tired of wind turbine photos, don’t worry: this is the final one I plan on posting. Maybe. Hopefully. Who knows. In any case, here’s yet another photo of the Kansas prairie and some wind turbines, but just like the others I have shared recently, this one is distinctly different in a way that I haven’t yet been able to photograph until now.

In a way this isn’t a picture of wind turbines or hay bales or anything like that. It’s a picture of scale. It’s meant to display the vastness of the rolling hills in Kansas, in a way that you can’t really get without something in the foreground and something else way in the background. Out west you can get these kinds of shots with mountains in the background that clearly conveys a sense of scale, but what do you do when you trade high peaks for open blue skies? Simple: find something else to use instead.

I shot this on my Nikon D500 at 200mm on my 70-200 f/2.8 lens, with the aperture set to f/8. I tried a wider aperture but the wind turbines in the distance were too fuzzy to even tell what they were, and f/8 gave me just the right combination of sharpness and background blur. If you look closely though, you’ll notice something interesting about the turbines: they’re blurry, but not in the way you might expect. Rather than losing sharpness due to depth of field, the towering columns and spinning blades appear wavy and ill-defined due to the mirage effect that happens when hot air rises from the ground and causes light to bend.

I was trying to capture an image that, like some of my other recent images, shows the sheer vastness of the midwestern vistas. It’s tricky to do that with a telephoto lens, but I think this picture does a pretty decent job due to the compositional elements of foreground and background. At the lower portion of the photo you can see hay bales receding into the distance, followed by rolling hills and then two layers of wind turbines: the two in the middle are closer and the two on the edges are father away. It all comes together to form an image that slowly recedes away from the viewer and, in doing so, helps illustrate just how big this scene really is.

If there’s one thing I’m not happy about in this picture it’s the editing artifacts where the sky meets the ground. I darkened the sky just a bit in Lightroom to make it look more like when I actually took this picture, and there’s a bit of a white line or some kind of border as a result that seems a bit artificial. I don’t care for it, but I also don’t care enough to spend a long time tweaking the original RAW file. I’m happy with the shot as-is, and that’s good enough for me :)