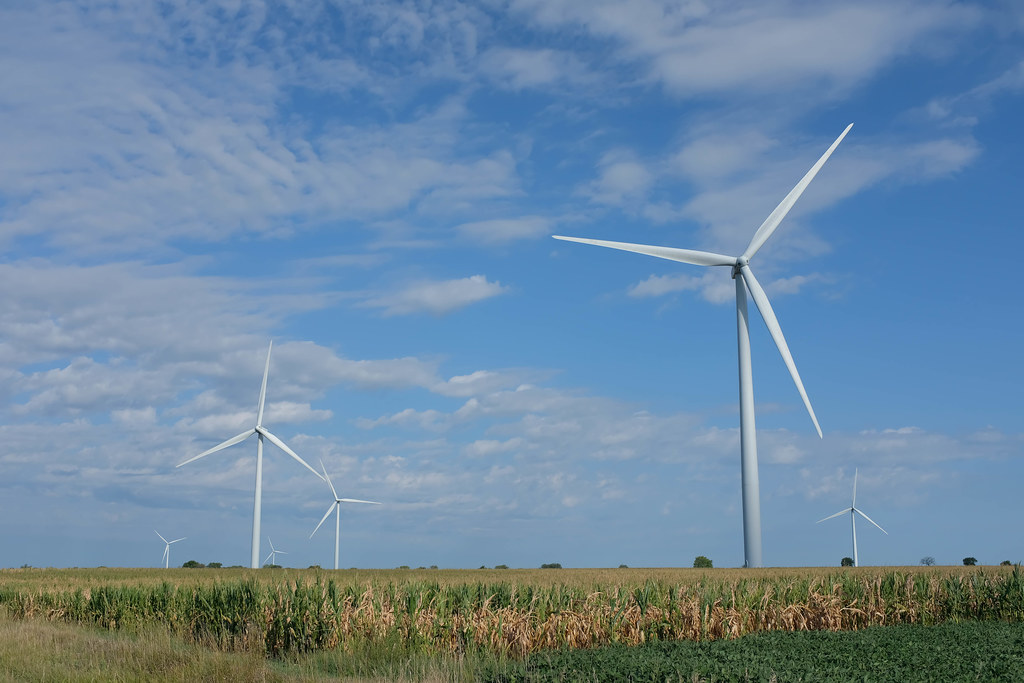 One strange problem with photographing wind turbines is how to deal with the position of the blades. What position should they be in for a cool-looking picture? If you have never taken a picture like this before you might think that you would want the blades of your subject (in this case, the large turbine near the right side) to be positioned just like the one on the left: one blade straight up, and the other blades at the four- and eight-o’clock positions. Here’s the thing though…that position doesn’t convey movement. It’s weird, but it’s true. When you look at the turbine on the left it looks static and unmoving, even though in reality it was turning and churning in the breeze just like the rest. So what do you do?

You could try to invert the position of the blades such that one is straight down and the other two are at the classic 10:10 orientation, but that doesn’t work either. The result is a turbine with what appears to be only two blades since the third, the one that is straight down, isn’t immediately noticeable. This position also makes the turbine look odd and off-kilter, though I don’t exactly know why.

My best advice when shooting pictures of a three-bladed turbine is to take the shot when the blades are just like you see here: one at the 1:00 position, one at the 5:00 position, and one at the 10:00 position. (Roughly speaking, that is.) It looks like they are on the move, going places, doing things, and generating power in such a way that other positions just don’t seem to convey. Since the blades were, in fact, spinning kind of rapidly when I took this I just set my camera to rapid-shot mode, held down the shutter, and fired off about 30 images. One of them turned out great–the one you see here–and I hope it gives you even a small sense of scope and scale that I got while standing in this field by the road.