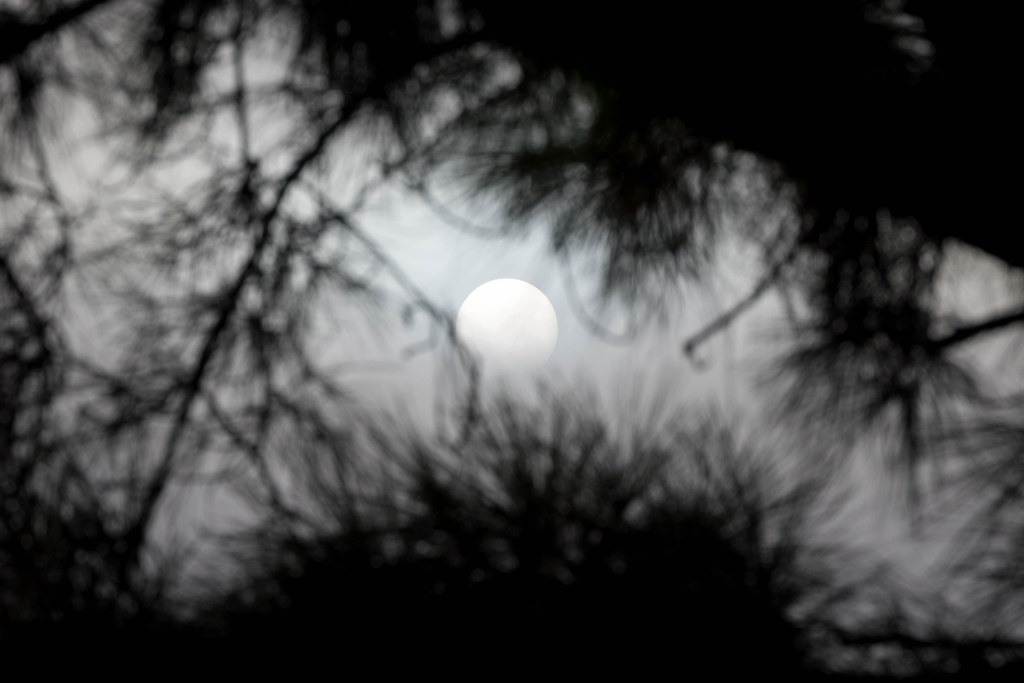 This is not a black and white photo.

It looks entirely monochromatic, sure, but the image you see here is exactly what I saw in person when I took this shot. It’s also, contrary to what one might assume, not a picture of the moon. This is the sun peeking through layers of clouds and fog on a Thursday morning in mid-October, and it’s a shot I never even considered until one of my kids made a rather astute observation.

To set the scene: K-12 schools were closed on this day due to Fall Break, and I was out in the front yard tossing the football around with my boys while my wife was inside getting some research done for her job. It had rained the previous day but overcast skies kept the humidity level high, and the next morning the whole neighborhood was enveloped in fog was so think we could hardly see our neighbor’s house. The stillness of the air, combined with the near-zero visibility, created an almost otherworldly scene punctuated with the sounds of my kids saying “Look at that spiral!” and “Good catch!”

I was right there in the mix with my boys with my mind split between tossing the ball and marveling at the fog, when my oldest son cried out “Dad, look at the sun!” I turned my gaze eastward and saw a bright patch of light in the clouds, but then I looked closer and realized that through all the haze we could actually look directly at the sun. I ran inside, grabbed my D500 and 70-200 f/2.8 lens, and hurried back outside to see if I could get a good shot.

I have learned from lots of pictures of the moon that it helps to have something in the foreground to create a sense of scale and context. (A picture of a bright circle in the sky is, in and of itself, just not that interesting.) I shot through a gap in the branches of the pine tree in our front yard at f/2.8, and quickly realized that aperture was way too small. The foreground was a blurry mess and didn’t look interesting at all. I quickly dialed my lens down to f/22, shot another picture, and the needles were too sharp. The Goldilocks-style sweet spot was f/11 which gave me just enough foreground blur (but not too much) and a clear shot of the sun, and I positioned myself so it looked like the sun was cresting a foggy hill–notice how the lower third is just a bit darker than the rest.

Five minutes later this scene was gone, and while I don’t know when I will get the chance to shoot a photo like this again I was thrilled to have the opportunity and know how to operate my camera, and make use of the elements around me, to get an interesting picture.