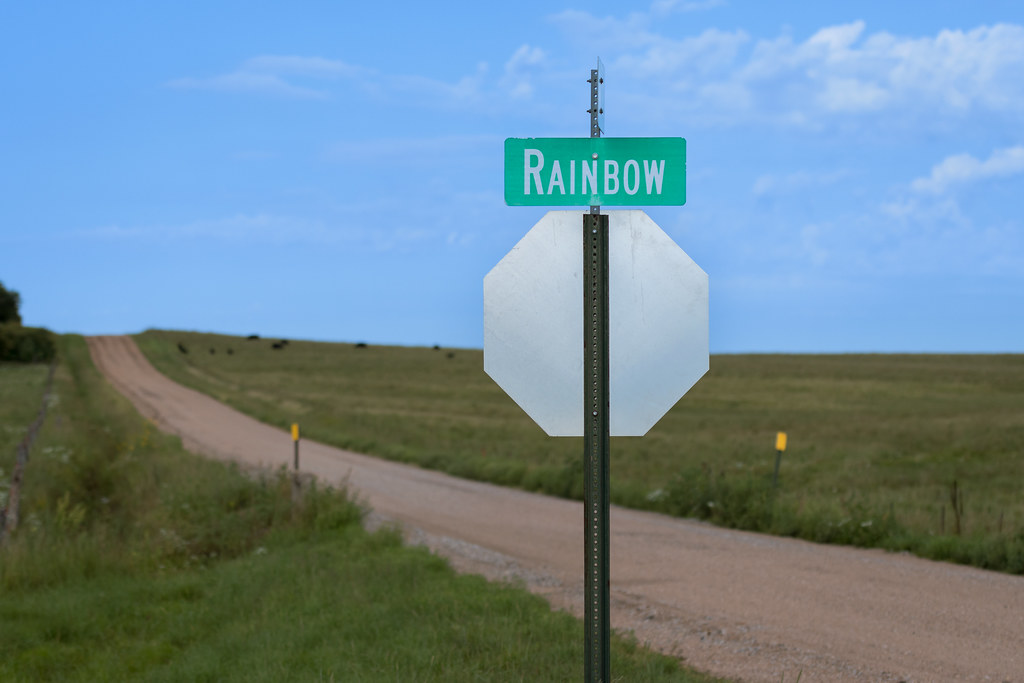 Many years ago I was traveling from Oklahoma to Nebraska when I came across an interesting street sign on Highway 36 just west of Washington, Kansas. It bore the name of an all-too-familiar recurring track in the Mario Kart franchise–the bane of many a racer’s existence, and the cause of more than a few controllers’ untimely demise after being hurled against the wall. Even so, Rainbow Road holds a special place in the heart of many Mario Kart players–perhaps precisely because of the challenge–and I was stunned to see an actual Rainbow Road street sign IRL, as kids these days might say.

Alas, when I first drove past that sign it was dusk and I had a schedule to keep, so I didn’t stop to get a picture. Over the years I took that route through Kansas on more than one occasion specifically to get a shot of the street sign, though my efforts were stymied every time. So when I found myself driving, once again, through Kansas earlier this year I made it a point to see if I could get a shot of this sign. However, I didn’t take my normal route. Instead, I went north through Washington on a small two-lane road which, after a few miles, turned to gravel, veered east, and then back north after joining up with–you guess it, Rainbow Road.

There’s a few miles of this stretch of road before it meets up with a highway that make for great photo opportunities such as the one you see here. I don’t know that this is the best shot one could get along this drive, but this scene certainly did make for an interesting picture in and of itself. I pulled over, got out my Nikon D500 and 70-200mm lens, and got to work composing this shot. It turned out to be trickier than I thought, though thankfully the sky was cloudy enough to case a nice diffused light over the entire scene. The challenge became how to capture an interesting shot of this street sign: what angle do I shoot from? What focal length do I use? What aperture and, as a result, what kind of depth-of-field am I going for? I ended up opening the door of my car so I could kind of half-climb into it, basically using the rear seat as a ladder, so I could get my eyes level with the street sign. I wanted a shot of the road going off into the distance, and I liked the two yellow markers on either side indicating the presence of a ditch. I like how it turned out, and I think it captures the essence of the scene quite well.

Two other notes: First, the road you see isn’t actually Rainbow Road. It’s 28th Road. Rainbow Road is the one I’m driving on, and you can’t actually see it in this shot. Kind of counterintuitive, but it’s true :)

Second, I had to do a bit of retouching on this picture to remove a day/date indicator on the stop sign that someone had written in marker, as well as a rusty bolt on the lower-right part of the N. Notice how there is only one bolt holding the sign to the post: that’s not how street signs are attached. There are almost always two bolts, as you can see on the 28th Road sign, but I didn’t like the unsightly rust on the lower bolt. Enter Photoshop, and thanks Adobe for making this possible :)

One final note to any who find themselves on this stretch of gravel in the middle of Kansas…make sure to watch out for errant turtle shells or ill-placed banana peels. And if you see a blue shell flying overhead, it’s best to run for cover.