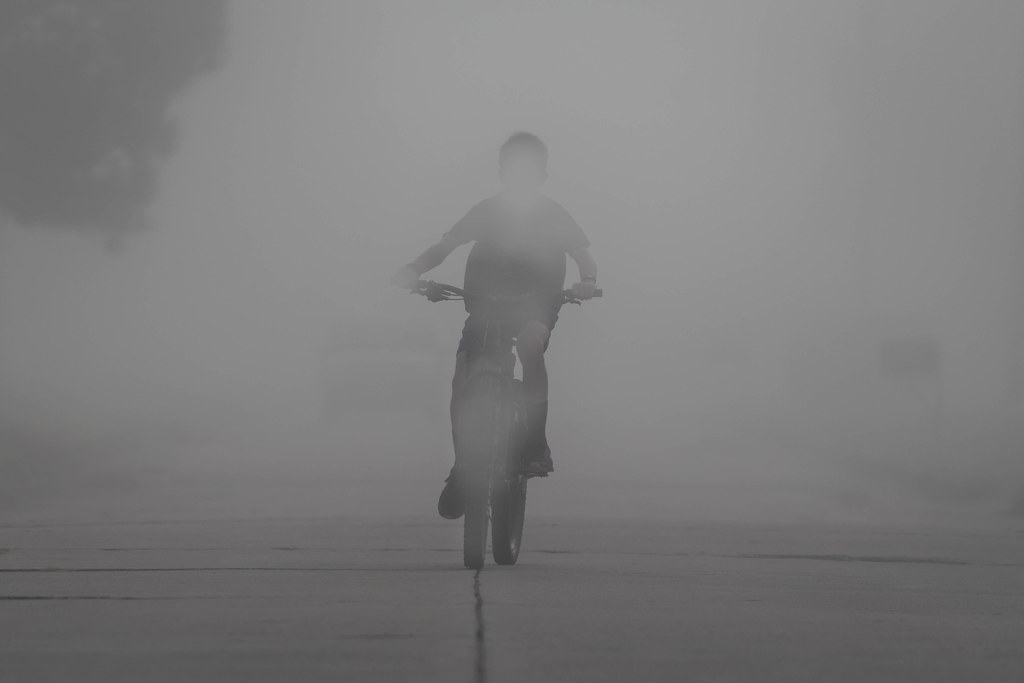 I just love shooting pictures in the fog. It’s one of the most challenging conditions in which to take photos, but the results are singular. There’s just no other way to get shots like this unless conditions are just right. You can’t fake this, and most of the time you can’t even plan for it. You just have to keep your eyes open, recognize these opportunities when you see them, and have your gear ready (along with a knowledge of how to use it) to get a shot. When my kids and I went outside on this particular morning in mid-October during the fall of 2021 I didn’t even have any specific intention to take this picture, but as soon as we left the house and started playing in the street we all realized just how incredibly thick the fog was. We could barely see across the street, much less down the street to our neighbor’s house. Right away I knew I could get an interesting photo but it would require some quick thinking before the fog evaporated.

I told my oldest son to get my bike, ride to the corner, and then cycle back slowly so I could take a few pictures. While he was on the way down I grabbed my d500 and 70-200 f/2.8 lens, and after a little while I honestly couldn’t even see him through the thick cloud that had descended on our neighborhood. He soon turned around and started the return trip, and I basically just fired off dozens of shots at f/2.8 hoping I would get one where he was right in the middle of the street like you see here. I didn’t want to bark orders to him about where to go and how to look, since the entire scene had a strange, calm stillness to it that was almost palpable. The result is something that looks like a shot out of a scary movie, and one that I don’t think I’ll be able to repeat any time soon…if ever.

Three notes about the image: Yes it has been edited to remove my son’s face. I don’t post pictures of my kids online publicly, but I really wanted to share this particular image, so the result is the compromise you see here. I used Photoshop to essentially copy/paste some fog over his head so you can’t see his face, and if that’s too much editing…well, it’s a creative choice I can easily live with. The other note concerns the car in the background, which you might not even notice at first. It’s actually much farther away than it might seem, and I can assure you my son was not in danger at all. A few seconds after this I did let him know that a car was coming up the street, and he had plenty of time to pull over and let it pass. I think it adds kind of an interesting layer to the image though, almost like he is being stalked by a nameless monster–one that you might not even see at first but is definitely there once you look a bit closer. Finally, even though this looks like it was edited to be black-and-white, I can promise you that what you see here is what we saw on this morning: a world shrouded in fog, devoid of color. It was really cool.