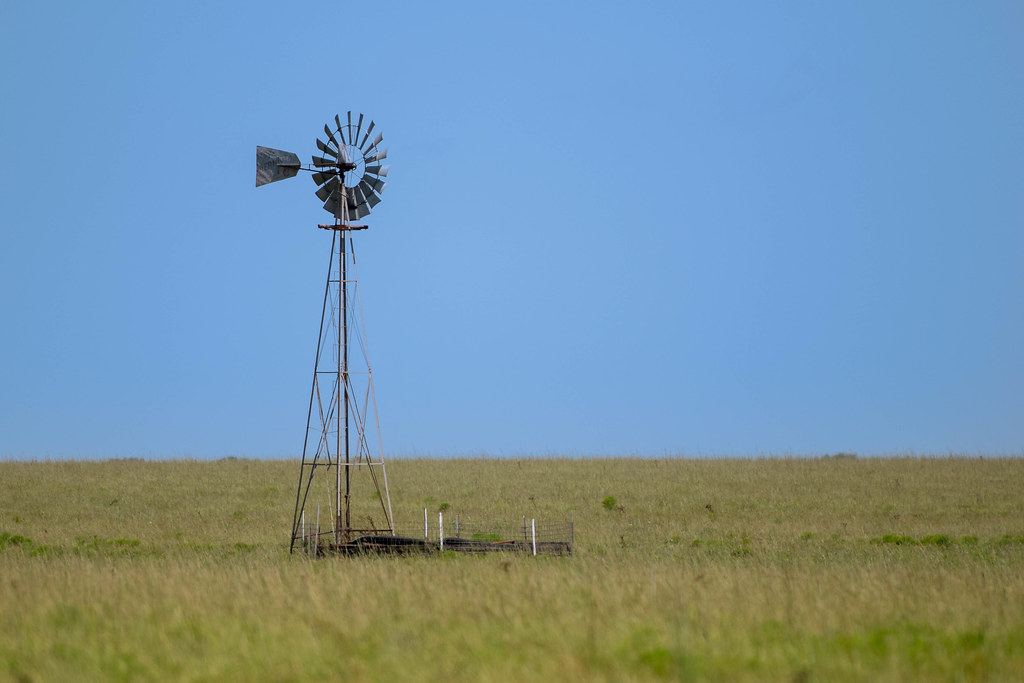 After weeks of photos featuring airplanes and wind turbines, this image is much more simple and also serves as the final shot in this series of photos from my trip to Nebraska. This was also, fittingly, the last thing I shot before putting my camera gear away and just focusing on getting back home. I think this was off of Highway 77 but I don’t remember exactly, though it was definitely somewhere in Kansas. From a compositional perspective this is about as simple as you can possibly get: the windmill lining up on the left third of the image, and the grass exactly filling the bottom third. There’s a clear subject, a sense of perspective with the grass in the foreground blurred out due to depth of field, and a wide open sky on the right side. No clouds, no birds, no trees, just a simple shot of a windmill on the prairie. And I like it that way.

While I appreciate the sheer size of the metal wind turbines so prominent across the midwest, there’s something special about a simple windmill–rusty after years of being blasted by the elements–sitting in a grassy field against a deep blue sky that seems distinctly Middle American. This image could have been taken 100 years ago and it would look almost the same, and hopefully 100 years from now this windmill will still be here for future generations to consider.

I shot this with my Nikon D500, 70-200 f/2.8 lens, at 200mm with an aperture of f/2.8. Is that lens overkill for such a photo? Maybe, but then again, without the f/2.8 aperture it wouldn’t have the delicious foreground blur that helps you feel like you are part of the photo. Shooting this was a good way of going back to basics, so to speak, and using fancy gear to take a very simple but very effective picture. I hope I can stop and see this windmill again on my next trip to Nebraska, and hopefully people will still see it standing tall for years to come.