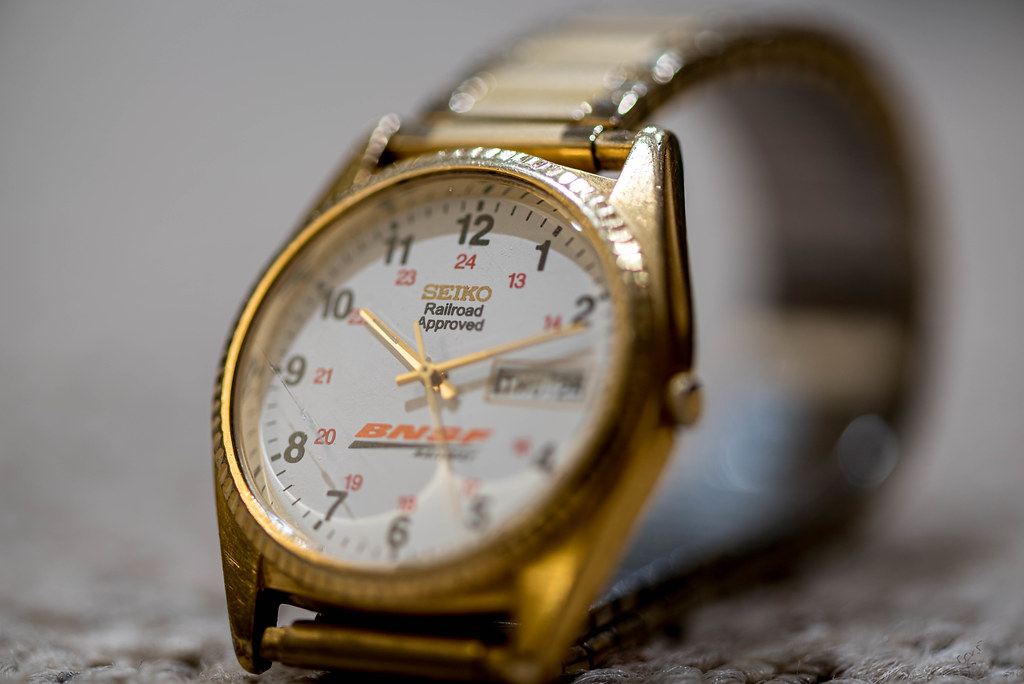 One thing I am really enjoying about my new Macro lens is its power as a storytelling vehicle. I’m finding that some of my favorite close-up photos aren’t just everyday objects, but things in my life that are part of a larger story or narrative. Of course it’s fun to take pictures of ordinary everyday objects like leaves, flowers, bugs, and the like, but I’m finding that I get greater satisfaction out of shots like this one that carry some degree of meaning or tell a particular story.

My dad was a railroader for his entire adult life, starting at the age of 18 and working until he retired over 40 years later. He wore a lot of (hard)hats during those decades, worked first-, second-, and third-shift, and drove his bike instead of his car almost every single day. (When I was a kid we were a one-car family so his practice was partly out of necessity, but I think he just rode his bicycle because he enjoyed it more than driving a car.) When he finally punched the clock one last time, BNSF presented him with this watch as a way of commemorating his years of service–a watch that he wears to this day, and as you can tell by the nicks and scratches on its face, has seen more than its fair share of use. That’s something my dad taught me that has stuck with me over the years: if you really value something, you shouldn’t keep it in on a shelf or hidden in a box. You should use it, and in so doing, show your appreciation for the value it brings to your life.

When my parents were visiting for Thanksgiving I asked my dad if I could take a picture of his watch with my macro lens, and he gladly acquiesced. The setup for this photo was pretty simple: the watch and my camera were just sitting on my living room floor, and there was a big light source off to the left thanks to the door to our porch. I played around with the exact position of the watch, how I wanted the light to be reflected around the bezel, and what exactly I wanted to focus on which was particularly crucial given the extremely shallow depth of field. I decided the most important element was the “Railroad Approved” moniker, especially since the BNSF logo would still be discernible even though it was slightly blurry as a result. I intentionally set the hands to the classic ten-and-two position common for timepiece photography, but didn’t stop the second hand in order to capture just the smallest bit of movement and dynamic energy in the frame. This meant that I had to wait until it came around to roughly the 20-second mark to take a few shots, because it just looked strange in most other positions. (Try it for yourself–there’s a reason most watches are shot with the hour and minute hand at ten-and-two, and the second hand pointing downward.)

I quite like how this turned out, though it’s a far cry from actual timepiece photography with good lighting and a photographer who knows what he or she is doing. Still, I had fun taking it and I’m glad I could capture this bit of my dad’s history at the railroad with one simple photograph.