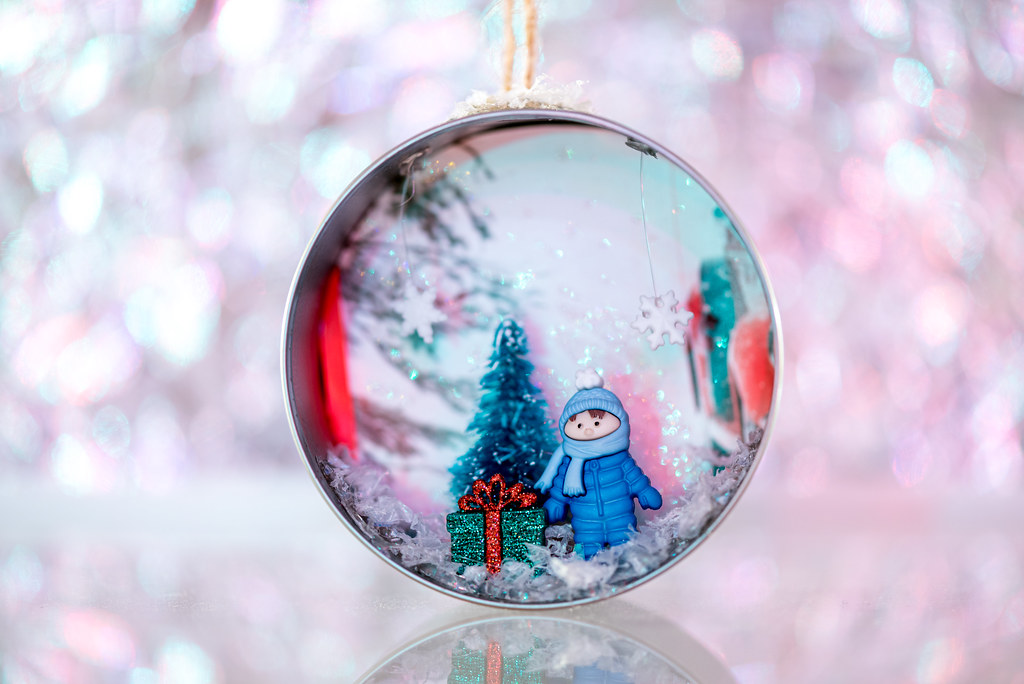 At this point you have probably seen several images here on Weekly Fifty that follow this same basic setup: a single subject sitting on a reflective base in front of a blurry background. It’s a simple composition but it’s just so much fun to shoot these kinds of pictures that I wouldn’t be surprised if more show up in the future. So if you like them, great! But if you’re tired of these kinds of images…well, just be forewarned that there may or may not be more on the way. I honestly don’t know as I’m writing this post, but all I’m saying is it’s a super fun and creative style that takes very little effort. (Though it doesn’t hurt to have a good macro lens too!)

As you might have guessed this is an ornament from our Christmas tree which also gives you an idea of the scale of the image. It’s not super small–about 3 inches from top to bottom–so you might be wondering why I shot it with a macro lens. Why not a normal lens? The answer lies not in the idea of making small subjects appear large (or, rather, normal size) but in being able to focus very close to any subject you choose. Most lenses have a minimum focusing distance of about one to two feet depending on the focal length and other optical properties of the lens. That means that you cannot physically focus on objects that are closer than your outstretched hand, give or take a few inches. To get this shot I had to be able to focus much closer than that, in order to make the image just how I wanted.

Shooting at such close distance meant that the depth of field was insanely small–the figure’s eyes are sharp but the tassel on his hat is not, and the background of the miniature diorama is blurry even though it is less than an inch away. The background of the entire composition is, of course, just some crumpled-up aluminum foil but it appears bright and colorful because directly behind the camera is our Christmas tree, and nearly all other lights in the house were turned out which meant that the light you see here is almost entirely coming from a hundred tiny little colored bulbs.

While I have certainly shot images like this before, none of them had this degree of color and vibrancy, and I think this could very well end up being one of my favorite images that I have shot with my macro lens. It captures something unique that I don’t think I could get any other way, and it shows a certain point in time, Christmas, in a fun and interesting way. I am learning so much with this macro lens and I can’t wait to see what this new year holds for it and for my photography :)