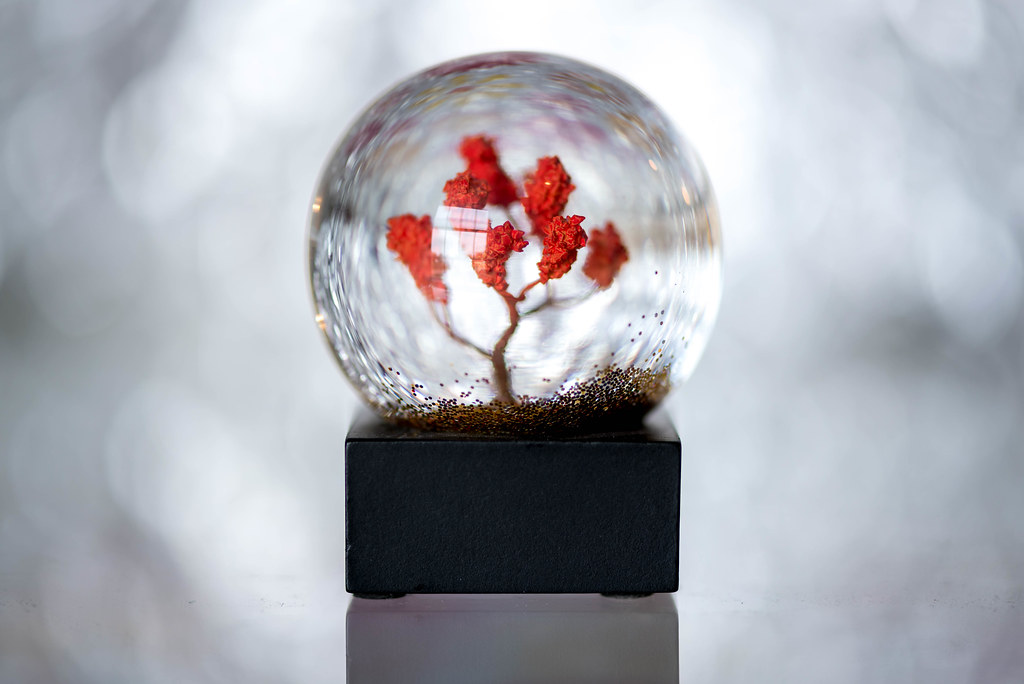 This one was really fun to shoot. What you’re looking at is a very small snow globe, about 2.5 inches tall, sitting on a clear surface in front of a crumpled sheet of aluminum foil. The setup is really simple, but the result is a photo I am quite proud to have taken. This isn’t the first photo I have posted here on Weekly Fifty that follows a similar format (one single subject shot against blurry aluminum foil background) and it likely won’t be the last, mostly because these images are just so much fun to create. I learned how to take these kinds of photos years ago with my 50mm f/1.8 lens, and it’s even more fun to revisit this concept with my 105mm f/2.8 macro lens.

There were a few tricky aspects of getting this picture to look just right, but maybe not in the way you would think. The first problem was getting the aperture just right in order to make sure enough of the tree was in focus, but I also had to rotate the snow globe to be in just the right position so the tree was facing the proper direction. You might think that’s a pretty simple issue but it got to be rather complicated because I couldn’t get the entire tree in focus without using a small aperture, which I didn’t want to do. I eventually found a few branches that I wanted crystal clear, but then I also had to deal with the lighting issue.

See that giant window being reflected on the surface of the globe? Yeah, that’s our dining room window right behind my camera and it presented an interesting challenge. I needed a big light source to get this photo to look right, but I couldn’t exactly move the light source to keep its reflection from obscuring the tree. I didn’t even notice this at first, and it took a while to get everything to line up just right: the aperture (and thus, the depth of field), the focusing, and the window behind me. My wife offered a few helpful suggestions as well, and I was glad to have her input because it’s her snow globe in the photo, and in the end I’m super happy with how this turned out. And now I want to make more shots like this :)