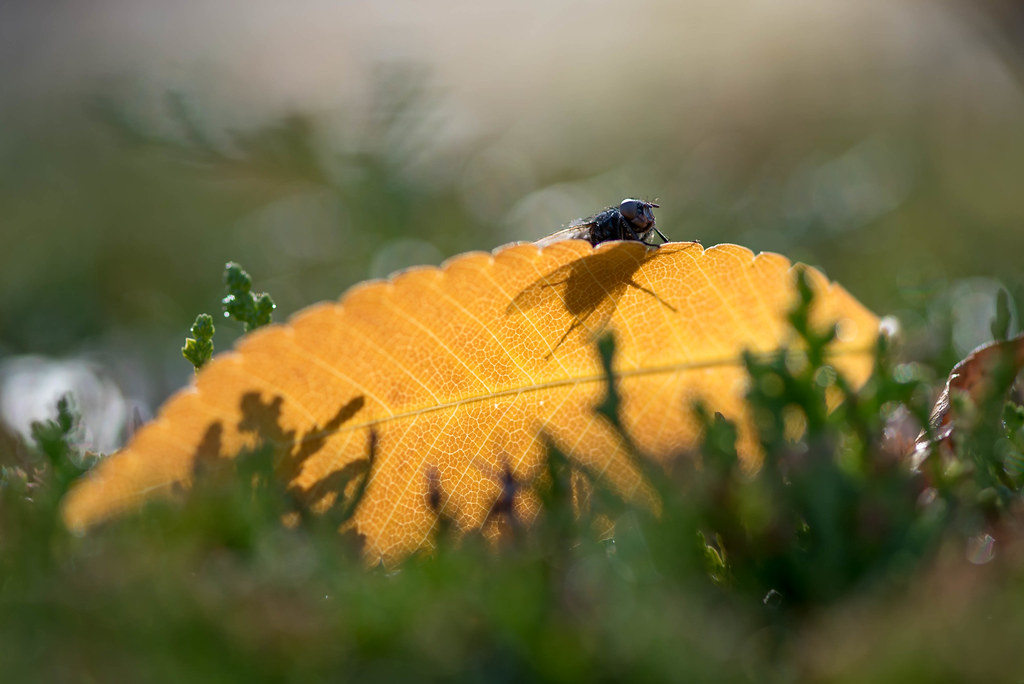 One of the reasons I bought a macro lens was to take close-up shots of bugs, insects, and other small animals. It’s a little tricky to do that during the winter though, because much of that kind of wildlife just isn’t around too often. Or, at least it’s not around too often where I live or where I am currently looking–maybe there’s lots of animals and I’m just not seeing them! In any case, I did happen to see this little fly sitting on a leaf while out walking around campus one chilly December afternoon and thought it might make an interesting image. In retrospect…I’m not really sure about this picture.

I don’t know what it was that I hoped to capture in this shot but something about the final image just doesn’t really work right for me. Maybe it’s the fact that the fly, while larger than most images of a fly I can recall capturing, just isn’t that interesting or compelling to look at. Its silhouette on the leaf is fine but unremarkable, and the yellow-and-green color palette is kind of bland and boring. I do like the highlights in the background and overall I don’t think this is a bad shot, just not a super good shot. It seems like the kind of picture someone would take while out wandering around with a macro lens without much to shoot. And it probably seems that way because that’s basically what happened :)

I do think it’s kind of neat that the fly opted to stick around for a few seconds before buzzing away, and whether that was due to the cold temperatures or something else (maybe it was more interested in something besides my giant honking camera lens) it is not lost on me that the situation that arose to make this photo possible was kind of unique even though the end result is somewhat pedestrian. If anything, this just gives me hope for spring and summer as I look for more opportunities to shoot with this macro lens.