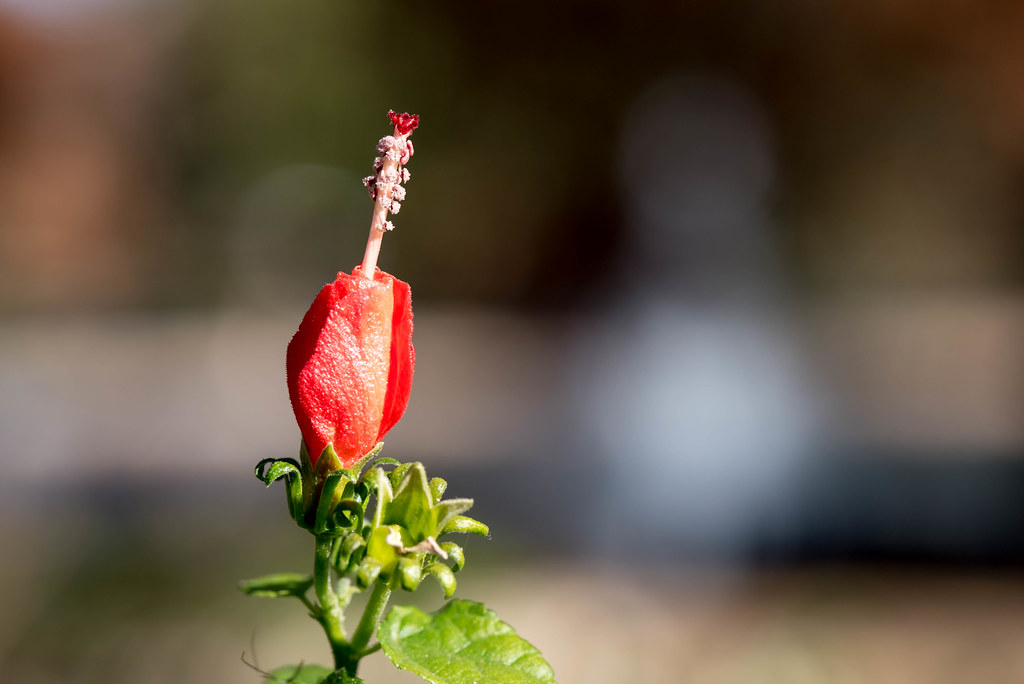 I’m not sure about this picture. I mean, it’s not a bad shot but it feels like there’s a much better image hiding underneath or just out of reach. In recent weeks I have posted a lot of shots taken with my macro lens that I am proud of, but this…well, it’s not one of them. Still, this picture was part of my photography journey so that alone is all the reason I need to share it here.

Here’s what I was going for when I took this shot: I wanted an image of this red flower as the subject, and the fountain in the background as sort of a secondary subject. What’s that…you don’t see a fountain? Well look again! It’s that white blob just to the right side of the red flower. I mean, maybe this could have been an interesting image but it just doesn’t quite get there. The flower and the fountain are too close, almost like they are competing to occupy the center of the frame. The horizon is tilted just enough to look like an accident instead of intentional. The lighting is harsh and uninviting. I could go on. And yet, it’s not entirely a lost cause because I did learn something when I took this shot.

It was really tricky to get the aperture just right, and in the end I don’t think I quite got there. I wanted the flower to be sharp and the fountain to be blurry, but still actually look like a fountain. I succeeded at making the flower sharp but I think I could have stopped down a bit more to make the fountain a little clearer. What I learned was that I need to be a bit more intentional when taking shots like this, and to stop down more than I might think is necessary. F/22, as opposed to f/13, would have probably resulted in a better image and of course shooting at a different time of day (or on a different day altogether, one with more clouds) would have no doubt helped with the lighting. While this won’t be anywhere in my top images of the year, it is a shot I’m glad I was able to take and I think it will help me improve my future photos–and sometimes that’s worth more than having an image turn out spectacularly.